A Retro Look... With a Twist 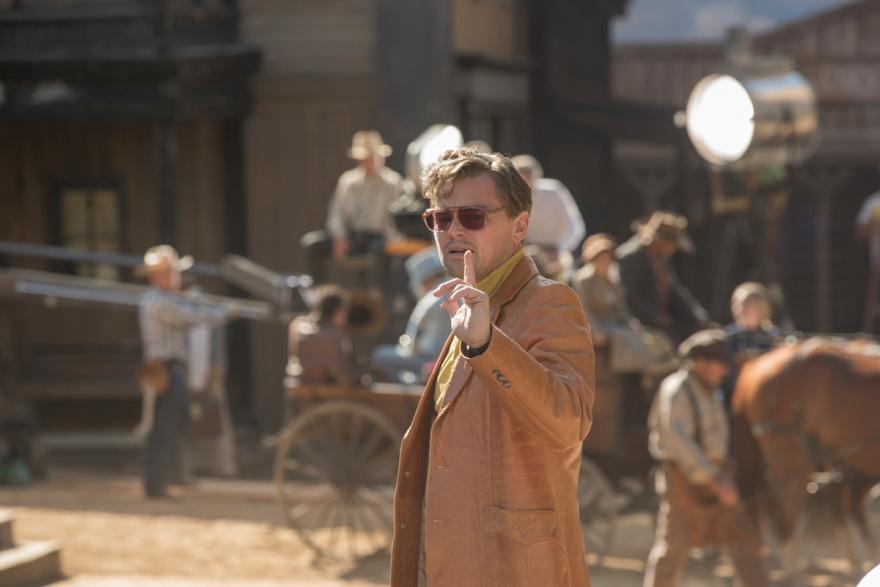 The highly anticipated opus from director Quentin Tarantino doesn’t disappoint. It’s a typically outrageous conglomeration of comedy and shock laced with pop culture references to cult B movie film and TV shows, replete with a soundtrack of 1970s hits.

The all-star cast for Once Upon A Time... In Hollywood is headed by Leonardo DiCaprio and Brad Pitt playing a TV actor and stuntman, respectively, who cross paths with the Charles Manson cult. 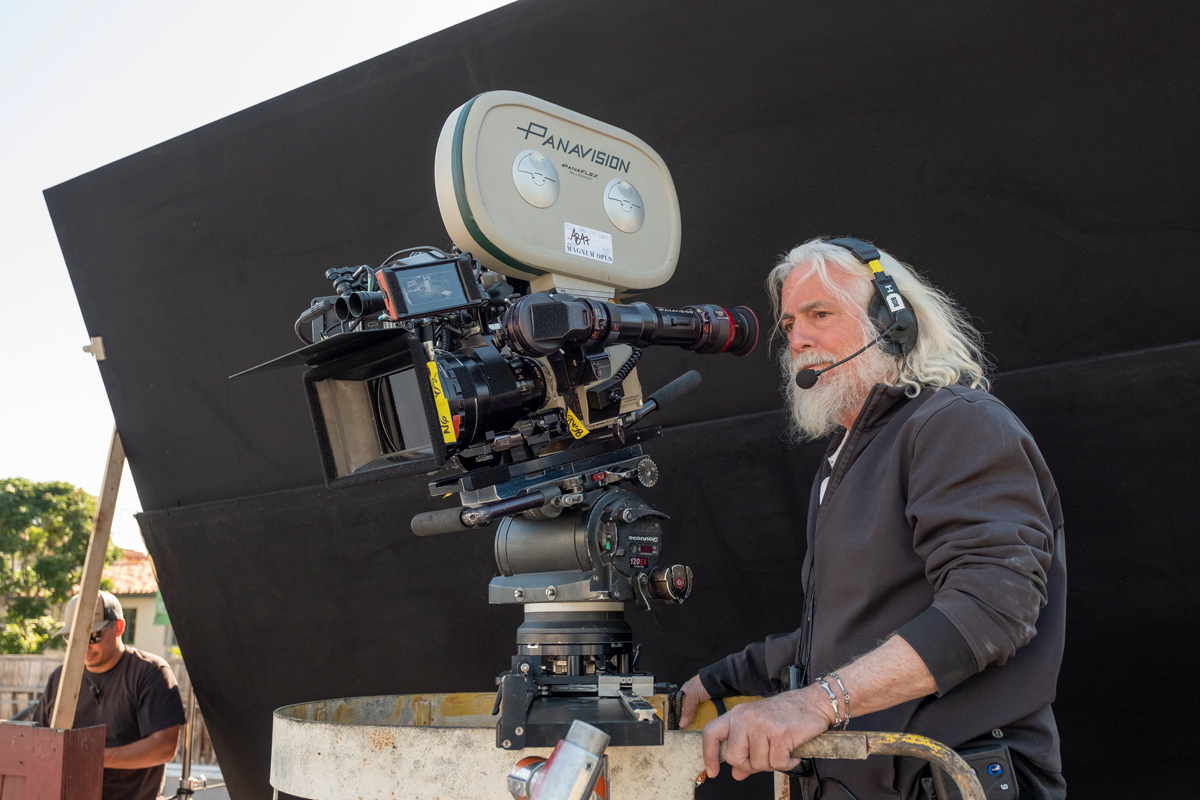 Robert Richardson ASC, Cinematographer, on the set of Once Upon A Time... In Hollywood.

The director’s longtime cinematographer Robert Richardson, ASC returns behind the camera, having lensed every Tarantino picture since Kill Bill (Vols 1 and 2), to shoot 1969 Los Angeles in primary colors of sky blue and sunset gold. Richardson returned to Panavision in Woodland Hills, the same facility where the filmmakers collaborated on the groundbreaking large-format release of The Hateful Eight (2015) as well as Django Unchained (2012).

“When I first met with Quentin to read (Once Upon a Time... In Hollywood), he told me he was uncertain if he would shoot in 70 or 35 or perhaps a mixture of both. Over time, he decided to shoot 35mm. One of the prime reasons was that Quentin had designed a series of shots that were to utilize a zoom and that’s not currently an option in 70mm.” 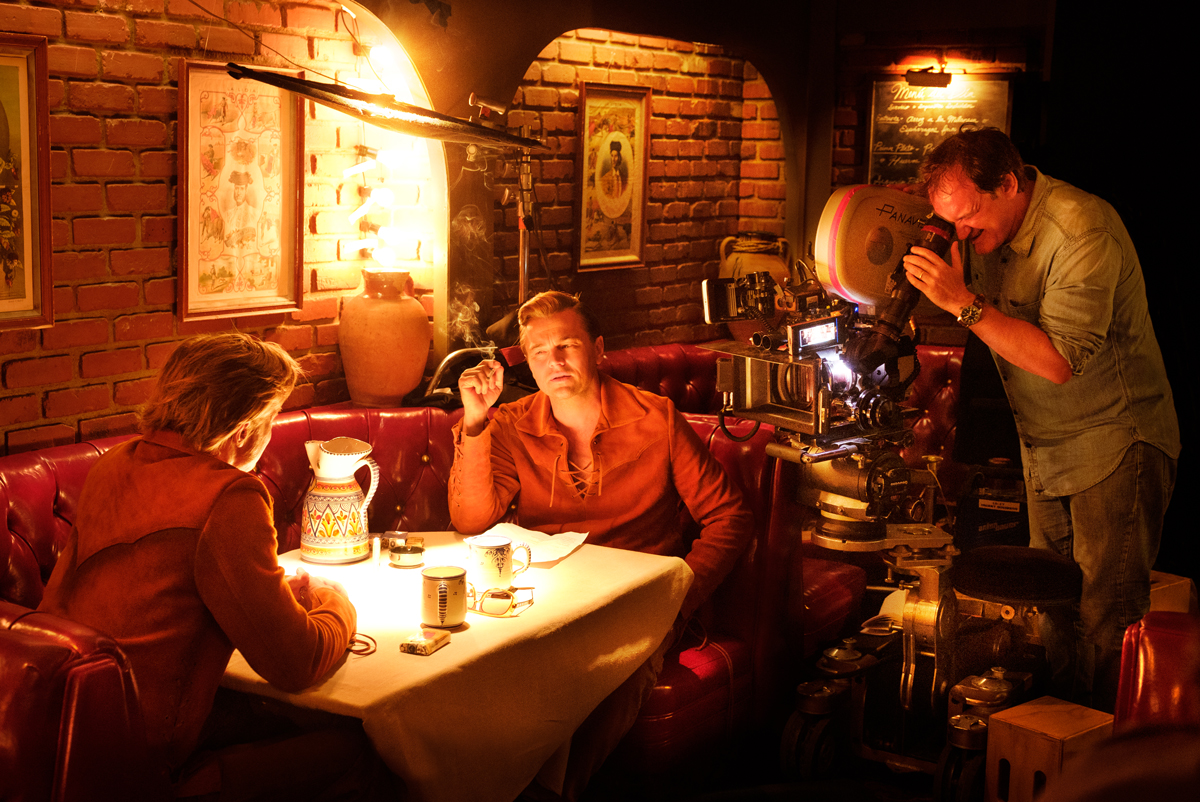 Quentin Tarantino checks the frame for a scene with Leonardo DiCaprio and Brad Pitt.

Thinking that a certain amount of handheld shots might form part of Tarantino’s design, Richardson chose the Panaflex Millennium XL2 as “ergonomically the most balanced 35mm” camera around. It can be converted from handheld to Steadicam to studio mode within seconds.

“The XL2 has the sharpest video viewfinder that Panavision has yet to offer, and the video is also improved in brightness levels which aids the camera assistant.”

Like The Hateful Eight, the film retains an epic cinemascope presentation paired with anamorphic lenses. Shooting in scope using anamorphics provided greater texture when moving between the various formats used in Once Upon a Time... In Hollywood such as 1.33:1 for early western TV sequences (based on CBS show Lancer) and 1:85 which was used for a series of commercials (that were shot but didn’t make the final cut). 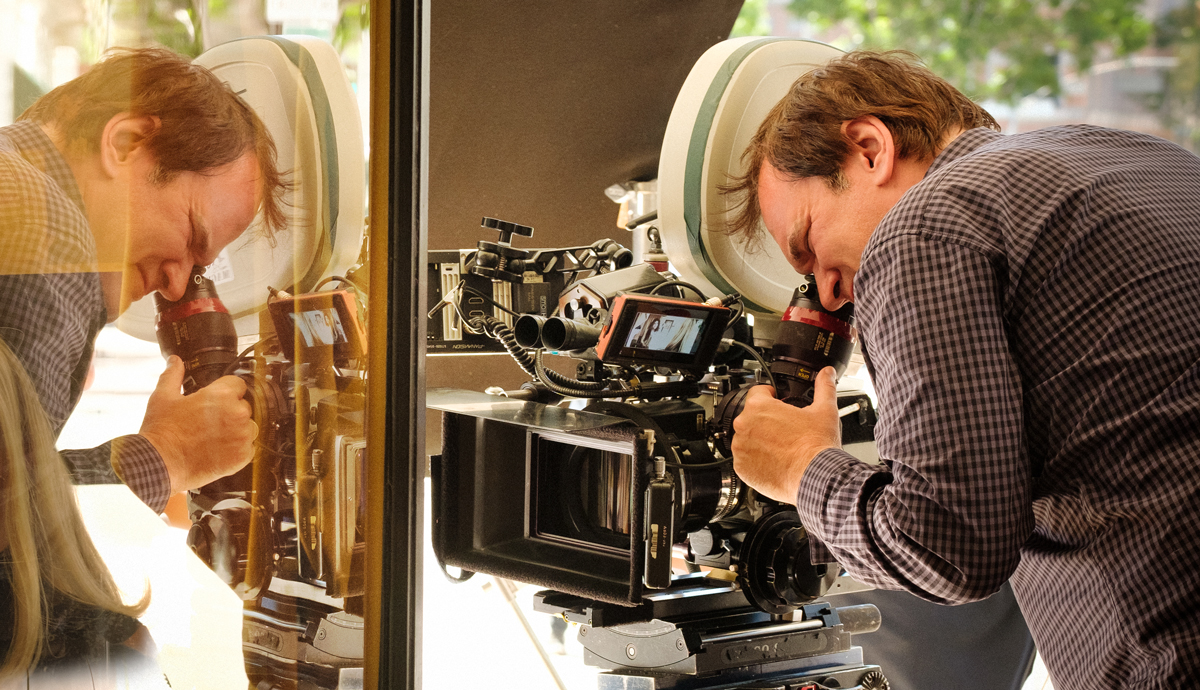 “Quentin loves the wide screen and didn’t want to consider a spherical Super 35 option,” the Oscar-winning cinematographer notes. “The aesthetic of Panavision’s anamorphics is wide ranging and the most impressive in the industry. From Ts to Gs to Cs to Es to Primos — each offers a unique look.”

Richardson says Tarantino envisioned a vintage feel to match the story’s era “but with a modern twist” and in pre-production embarked on a series of tests to find the precise lens selection. “We wanted a 1970’s retro, something familiar from the past but sitting in the present so when audiences watch the film it should feel slightly off balance.”

With camera assistant Gregor Tavenner, Richardson tested a range of Panavision glass both on site at Panavision and on location of the western set that was eventually used for black-and-white sequences of DiCaprio’s actor character playing a bounty hunter. 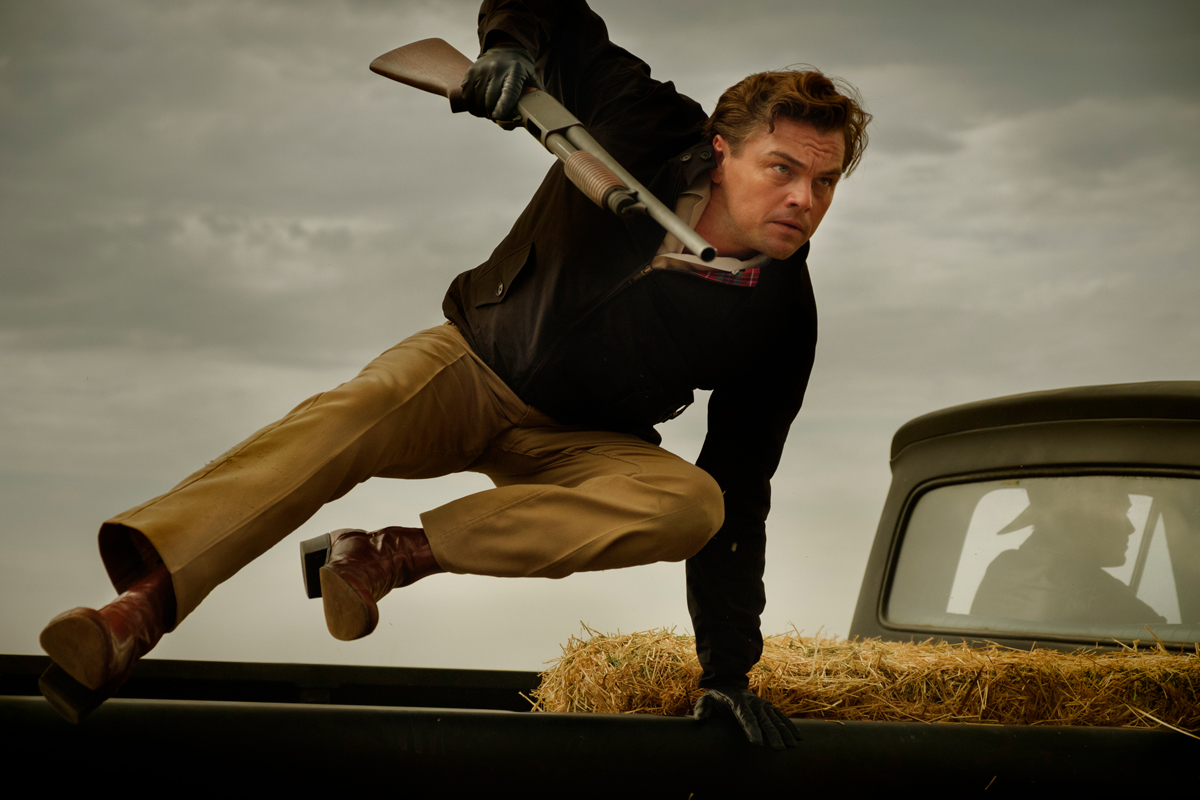 “Each of these lens series has a specific feel and different personality so Gregor and I had to base our decision on what Quentin was requesting for a particular shot. At times we would utilize a lens with heavier flare capabilities or flaring that we thought more interesting in design, and other times we chose a lens that could handle high contrast without getting washed out. There is no magic formula – it’s test, trial and error.

“That said, Dan Sasaki greatly aided us in getting closer focus for the T Series and losing the capability, to some degree, in distance.” 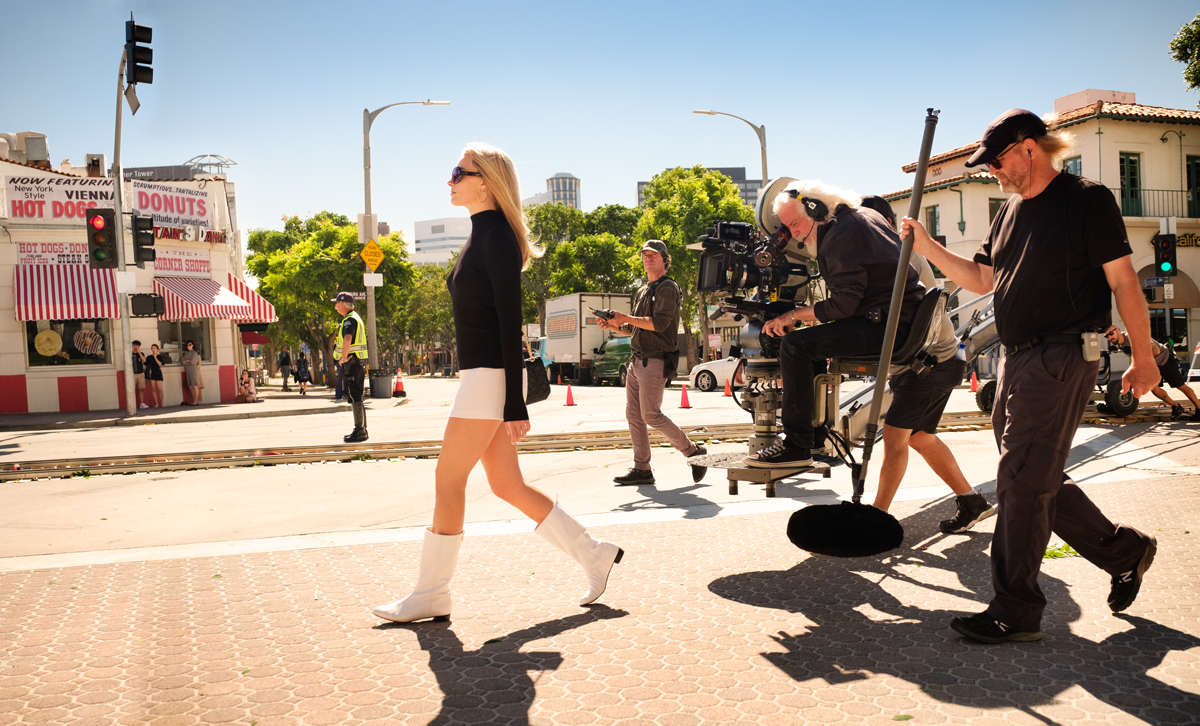 The film stock was Kodak Vision3 5219, 5213 and Eastman Double-X black-and-white film 5222, with one small sequence on Super 8 Ektachrome and part of another short scene on 16mm Ektachrome.

Colorist Yvan Lucas collaborated with Richardson on setting the look and supervised the 4K digital intermediate. FotoKem developed and printed the dailies.

“We took our initial tests to Yvan and to FotoKem and searched for a richer, saturated look particularly in the skin tones. With the aid of production design, costume and make-up, we got closer and closer to what Quentin was asking. Certain lenses capture color in a more natural manner while others give a richness. It takes time to understand how each is performing and the skill of a talented grader to make the adjustments.”

Richardson adds, “I am very pleased with how the film looks but more importantly how it supports the brilliance of what Quentin directed by meeting his initial requests for a rich tapestry of color. I hope audiences agree.”