Cinematographer Oren Soffer crafts a nuanced portrait of an intimate weekend for the short film See You Soon. 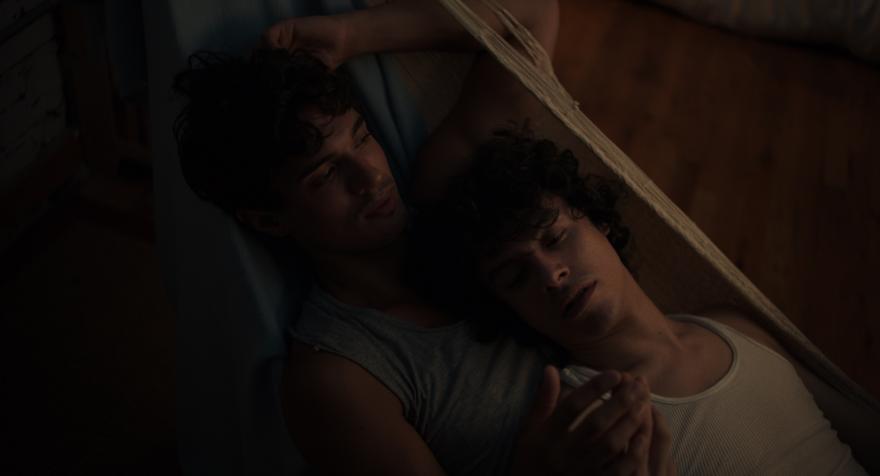 Vincent lives in Los Angeles, Anthony in New York City. They met on a dating app and have been talking for months, but the physical distance between them has kept them apart until now, when Vincent flies to New York to stay with Anthony for a long weekend. Their first day is marked by awkward moments and fumbling connections that nevertheless give way to a profound intimacy that’s both welcome and frightening to each of them. As they grow closer together, they can’t help but recognize that Vincent’s departure is also drawing nearer, and once the weekend is over, they’ll again be thousands of miles apart.

Written and directed by Tyler Rabinowitz and shot by cinematographer Oren Soffer, the 16-minute short See You Soonstars James Cusati-Moyer as Vincent and Jonny Beauchamp as Anthony. The project was the latest in a string of collaborations between Soffer and Rabinowitz, going back to the latter’s New York University thesis film. Shot in New York City over four days in the summer of 2019, See You Soon premiered online on June 27, timed with the celebration of this year’s Pride Month. (The short can be watched here.)

The filmmakers captured the short with an Alexa Mini camera and Panavision Ultra Speed lenses, all sourced out of Panavision New York. “The design of the movie, in terms of how we used lenses and camerawork to create intimacy, was done to address what both Tyler and I feel is a lack of representation of intimate gay relationships,” Soffer shares. “As queer filmmakers, it was really important for us to craft a visual story on screen that we just don't see much of, certainly not depicted in this way.”

Soffer recently connected with Panavision to shine a light on his and Rabinowitz’s creative approach to the project. (Note, the following conversation contains spoilers.) 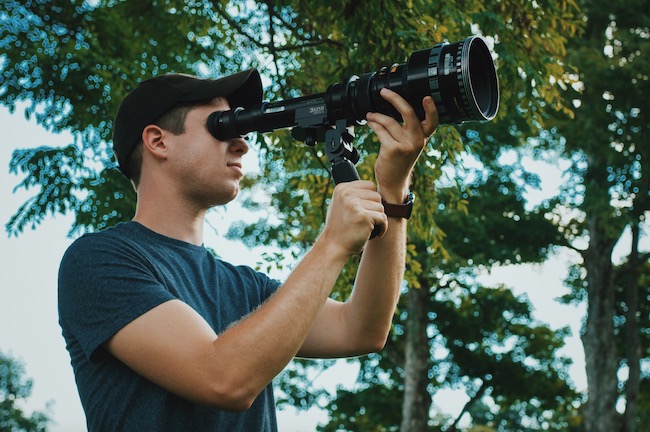 Panavision: Were there any particular visual references that you and Tyler looked at for inspiration?

Oren Soffer: When Tyler sent me the first draft of this script, our process actually started with music. He said, ‘While reading this, listen to “White Ferrari” by Frank Ocean. I want this film to feel the way that song sounds.’ So that was the first piece of media that we consumed while thinking about how this film was going to feel, and then we started to figure out how it was going to look. We actually didn’t exchange a ton of references; I think we made a conscious choice to follow our gut instinct on a lot of things. The two [features] that we did look at in terms of tone and mood were Call Me By Your Name [directed by Luca Guadagnino] and Weekend by Andrew Haigh, but stylistically we deviated from both of them a little bit.

We wanted the whole film to be about capturing the emotion between these two people, so everything about the visual style was going to be naturalistic and very minimalist and not very stylized. It was all to service the world of these two guys and what they feel spending this weekend together. We wanted to strip away any distractions in terms of the visual style and just let it be. 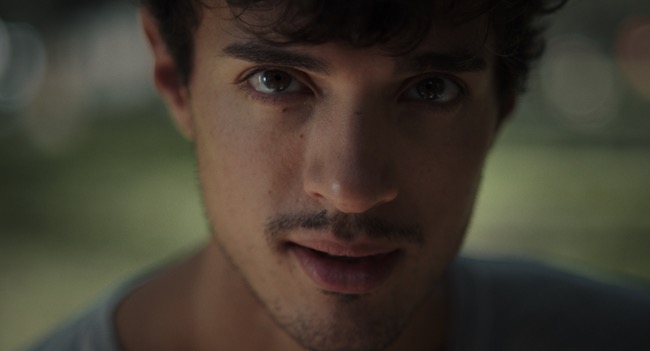 How did you arrive at the Ultra Speeds for your lenses?

Soffer: After the thesis that Tyler directed at NYU, Panavision helped us out on music videos that I shot and he produced and/or directed. They’ve been so supportive of these projects over the years, so when it came time for this project, Panavision was really the first place we thought of, and I reached out to Marni Zimmerman to see if they’d want to do another one.

Tyler and I had a conversation early on about anamorphic versus spherical, but it was not a long conversation. We wanted a sort of traditional aspect ratio, not widescreen, just to bring these two characters together in the frame and emphasize that this story is about the connection between them. And the Ultra Speeds were my first choice; they’re my favorite spherical lenses. The glass is stunning. Shooting wide open, like I tend to do, creates really aesthetically pleasing visual ‘flaws’ in terms of the astigmatism, the bokeh, the falloff and everything. It was perfect for the mood that we wanted to create with this project. It was a little bit dreamy, a little bit ethereal. And I like that the lenses are really fast, so when you shoot them wide open, you get really quick falloff in terms of depth of field. That sense of separation between the characters and the background was part of the visual language that we wanted. We wanted them to feel isolated from the world, together with each other and separate from the environment.

It really underscores the intimacy between them.

Soffer: Intimacy was the key word that really informed all of our creative decisions: aspect ratio, lens choice, how we shot with the lenses, and also shooting on longer focal lengths, again to decrease the depth of field and emphasize that sense of isolation. We only shot wide-lens close-ups a few times, for key moments in the film when we wanted to create a sense of physical presence, to bring the audience within the world of the characters. As they were becoming more intimate, we were shooting with longer lenses to create this tension, like there’s a separation hovering over them because they both know that eventually they’re going to have to not be together. But then, for the scene where they have their fight, that’s actually where we shot with wider lenses closer up, bringing them together in the moment that they’re coming apart. It was an intentional, subtle subversion of the audience’s physical proximity to the characters. 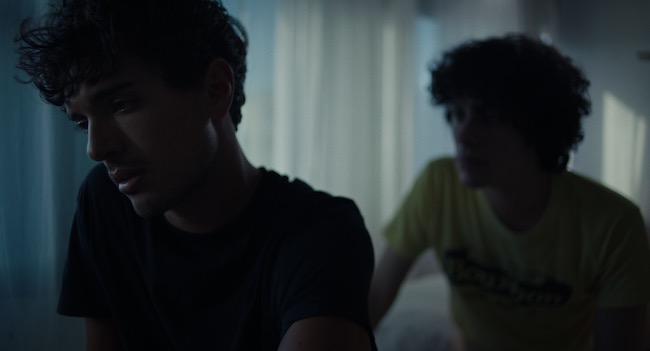 Early in the movie, there’s a long-lens shot of the couple walking toward the camera, a day exterior with the Brooklyn Bridge in the background. What focal length would that have been?

Soffer: That was a 150mm Ultra Speed, which is the highest focal length in that set, and it was with a 2x extender, so effectively a 300mm lens — and we were wide open. Shout out to 1st AC Julia Kupiec; I never gave her an easy time!

That shot’s been done before, but it felt right. We wanted the shallowest depth of field possible while also holding them in the shot the whole time — we wanted to capture their whole conversation in one go. We also used a long lens the first time they meet; their first physical encounter is a similar shot, with a long lens shooting down the street, and the two of them come together in the frame and hug. Early on in their relationship, we really wanted to emphasize this distance between them, like they’re not quite close yet. 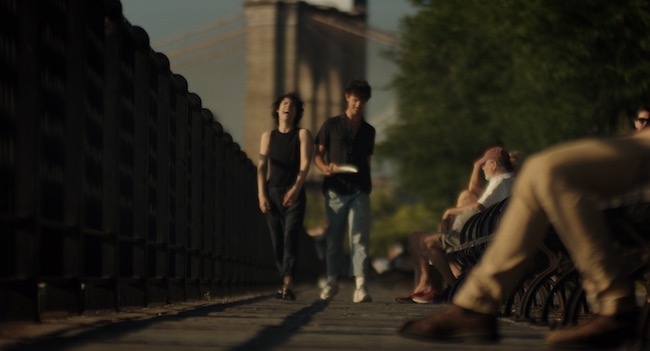 There’s an attention to detail that makes the characters’ experience feel so real and lived-in. I think of the shot of the couple’s feet in bed — it’s almost as if these are the fleeting moments that will linger in their memories. Do you and Tyler work with storyboards or shot lists, or do you find these images on the day?

Soffer: We do shot-list everything, but it’s a shot list that leaves room for discovery. We come in with a plan, but we’re always open to changes and discoveries on the day, discovering little moments, discovering shots or angles. So our shot lists are pretty rudimentary, and the specific placement of camera isn’t decided until we see blocking. The shot list would say ‘wide,’ ‘medium two shot,’ and then ‘detail shots.’ We didn’t always plan which moments we were going to capture until we saw what the actors would do, but the idea of getting those details was planned.

We wanted this to be really matter of fact; we didn’t want to do anything that would draw attention to the camera. So it was either lock-offs or handheld. This was also inspired by Call Me By Your Name and Weekend, both of which take formalist approaches to how they shoot and strip away stylization in a similar way.

But then, with the last shot, the camera’s rigged outside the car that takes Vincent back to the airport — the car effectively turns it into a ‘dolly shot.’

Soffer: That’s exactly why we did that. We saved the one ‘dolly shot’ for the moment where Vincent is going away. That movement is their separation. 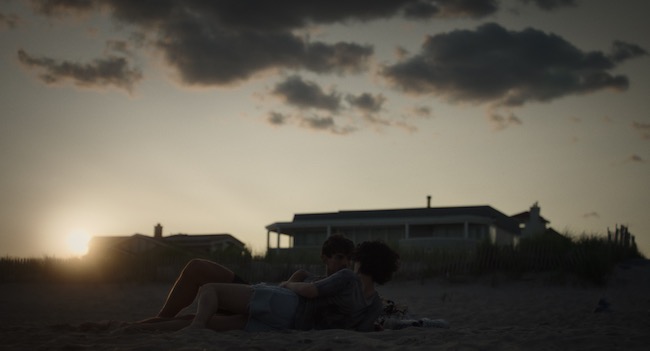