Gaffer Tom Gates has been a mainstay on HBO's mega-hit Game of Thrones since Season 1. We chatted with him about what goes into lighting one of history's biggest TV dramas. 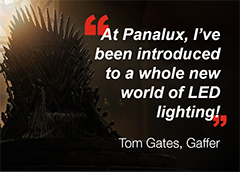 “Overall, the entire thing is BIG!”

Top Gaffer Tom Gates summed up what it’s like working on HBO’s mega hit television series Game of Thrones when he stopped by the Panalux UK headquarters earlier this year. Since Season 1 shot in 2010, Tom has been a mainstay on Game of Thrones, a nearly year-round job spanning more than five international shooting locations and six stages at the Titanic Studios in Belfast.

Tom is unquestionably one of the most successful Gaffers to come out of the UK. His work includes high-end TV Drama and film productions: Bridget Jones’s Diary, 51st State, Your Highness, The Night Manager, The Jacket, Saving Mr. Banks — and the list goes on.

Having gaffered for nearly 30 years, Tom has weathered the ebb and flow of TV and film production in the UK. He is known far and wide for his love for his work, moving from job to job all year long without downtime or holiday.

When we sat down, we wanted to know how the UK entertainment industry has evolved over the course of his career, what he still loves about work, some of his fondest professional memories, and – of course – his experience working on GoT. An excerpt of our conversation is below:

PANALUX: LET’S START WITH GAME OF THRONES. WHAT A MASSIVE PRODUCTION! TELL US ABOUT YOUR EXPERIENCE ON SUCH A PROMINENT SERIES.

TOM GATES: It’s like five movies in one – honestly! It’s six to eight weeks of prep and then seven months of filming. We have two main units. We normally shoot for 22 weeks and then there is another full-blown unit [headed up by Gaffer Mark “Rocky” Evans].

Everything about it is just huge! There are five DoPs, whereas most productions only have one. Plus there are 1,200 other people working on this one show. That gives you an idea of the size of production.

THAT’S MASSIVE. HOW MANY FILMING LOCATIONS ARE THERE?

Some years there have been new locations but normally there are about 20 locations in total.

THAT’S A LOT. YOUR CREW MUST BE REALLY GOOD.

GATES: My unit shoots everything in Northern Ireland and so far I’ve always used local crew – they are fantastic! They’re really, really good. I have an excellent crew around me – their jobs are hard. Mine is easy! I just turn up to set and do what I’m told.

I’ve got two really good Rigging Gaffers – Bret McCrum, Gareth Hetherington – a great HOD Rigger – Hugo Wilkinson – and an excellent Best Boy – Ger O’Hagan – in charge of me and everything I do!

IN TERMS OF PANALUX, YOU STARTED OUT AS AN ELECTRICIAN AT LEE LIGHTING BACK IN THE DAY. YOU MUST SEE SOME FAMILIAR FACES TODAY.

GATES: I started in Lee Lighting in 1976 as an Electrician. I worked on all of the films at Lee Lighting back then. But this is my first job with Panalux. I have known [Panalux Sales Director, TV Drama] Sinead for many, many years, and a few others who I met beforehand.

For GoT, [Panalux Group Technical Director] Chris Millard and [Panalux Technical Manager] Jim Algar were heavily involved in all the technical aspects of the job, which, at some points, were tricky. And [Panalux Manchester General Manager] Colin Smart and [Panalux Account Manager, Film and Drama] Laura Thompson were an enormous help from the beginning of the job with logistics and planning.

The Panalux team is very good. I’m quite old fashioned and I tend to stick to old lighting. At Panalux, I’ve been introduced to a whole new world of LED lighting! I’m going through the entire process of learning the new LEDs – I’m trying to convert…slowly. But I’ll get there!

Panalux have a lot of lights. There are a lot of different ways to light a set and get roughly the same effect – a 10k is a 10k. I’m old school and am used to what I’m used to. But with HBO, we’ve had to be careful about the production footprint and we ended up incorporating quite a lot of LED stuff last year.

[Panalux kit] worked throughout the whole year. We didn’t have hardly any replacements for the entire year! What I appreciate the most is that there is no ego at Panalux. Egos are a pain.

YOU’VE WORKED WITH SINEAD FOR A LONG TIME, WHAT FORMS THE BASIS OF YOUR PROFESSIONAL RELATIONSHIP?

GATES: We have a complete circle of trust. Sinead is smart and accommodating. We talk and always work it out. In fact, we spend all year talking and working it out! It’s up to me, Sinead and [HBO producer] Lisa McAtackney to keep everyone happy.

AND WHAT IS IT LIKE TO WORK FOR HBO?

GATES: I would be happy to work for HBO forever! They are a fabulous company to work for, probably the best. I have a long association with the same company and the same people.

Here’s an example: Just before Christmas, an HBO producer asked me if there was any way to make my life easier! That is unusual.

Producers, especially these producers, have to deal with so many things. Me and lighting is just one of those things. I’m always humble of that fact.

Here’s another example: For the long night shoots, one of the producers are always there…all night. That’s unusual.

TAKING IT BACK A LITTLE BIT, WHAT ARE SOME OF THE MAJOR CHANGES YOU’VE WITNESSED IN OUR INDUSTRY SINCE YOU STARTED?

GATES: It is slightly different now than when we were starting out. GoT is evidence of that change. It was more of a social thing before; there were fewer people and a lot less money. Today, there seem to be so many people I’ve never met before – and I’ve done this my whole life.

IN LIGHT OF THESE EVOLUTIONS, HAS YOUR LOVE FOR THE JOB CHANGED AT ALL OVER THE YEARS?

GATES: I’m still happy when someone gives me a job! I have been doing this and only this for so long, I wouldn’t know how to do anything else. I love it!

I live in East Sussex and – even this morning – if I’m working in London I’ll get up at 3:30am to get to work. I quite like that. All year I’m running on adrenaline and just don’t have the time to think. I’m just reacting. I like that. The whole thing just carries you and you carry on. Even if I had an arm hanging off, I’d still turn up to work.

HOW DID YOU GET YOUR START AS A GAFFER? WAS IT A BIG BREAK OR A NATURAL PROGRESSION?

GATES: At first, when I was a young Spark and van driver, I went out with different Gaffers and thought “When I get older, I’m not going to be able to carry all this stuff…”

So I made myself be on set and watch everything. My first job was a small job gaffering with a DoP. I was nervous as hell! But the DoP gave me another job and then another and then another, and one day it just clicked. All the sudden there was no more mystique and it all fell into place!

When you first walk onto a film set, you think you’ll never learn it…I thought that too. It was so overwhelming at first. And then one day, I just got the eye and it clicked for me.

Today, you could drop me anywhere in the world, on any films set and I would find my way without a problem. It’s my eye.

But, if someone asked me to fix a ballast, I couldn’t do that!

SO BETWEEN GOT SEASONS, DO YOU HAVE TIME TO DO ANYTHING ELSE?

GATES: I like to keep working year round. I work on other projects – more with or for friends. Between GoT seasons, I’ve been able to do projects like “The Dresser” with DoP Ben Smithard. I worked on a vampire movie ‘Eat Local’ that is in post-production now. It gets tight pretty tight with GoT though.

It’s been good working with Sinead and Panalux – I called her the other day for this little thing I’m doing. She is incredibly understanding and accommodating. Every job is important – small or big.
Right now I’m working on “Harley and the Davidsons” (shooting in Bucharest).

Without lights, I can’t do anything!

Panalux was the exclusive lighting provider on season six of Game of Thrones.