The Circle Is Complete

Honoring the visual tradition of the first eight films, Dan Mindel, ASC, BSC, SASC reteams with Panavision to conclude the Star Wars saga with Episode IX – The Rise of Skywalker 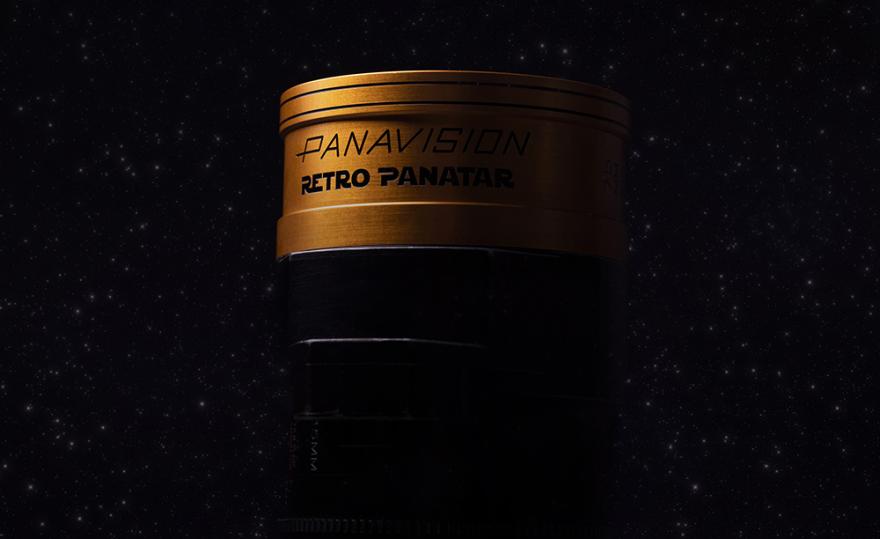 In February 2019, director J.J. Abrams called “Cut!” for the last time during principal photography of the ninth chapter of the long-running Star Wars saga. Star Wars: Episode IX – The Rise of Skywalker concludes the third trilogy in the series—the trilogy that began with the Abrams-directed Episode VII – The Force Awakens, released in December 2015. That film continued the story of Luke Skywalker (Mark Hamill), Leia Organa (Carrie Fisher) and Han Solo (Harrison Ford) while also introducing a new generation of heroes and villains, including Rey (Daisy Ridley) and Kylo Ren (Adam Driver), respectively. 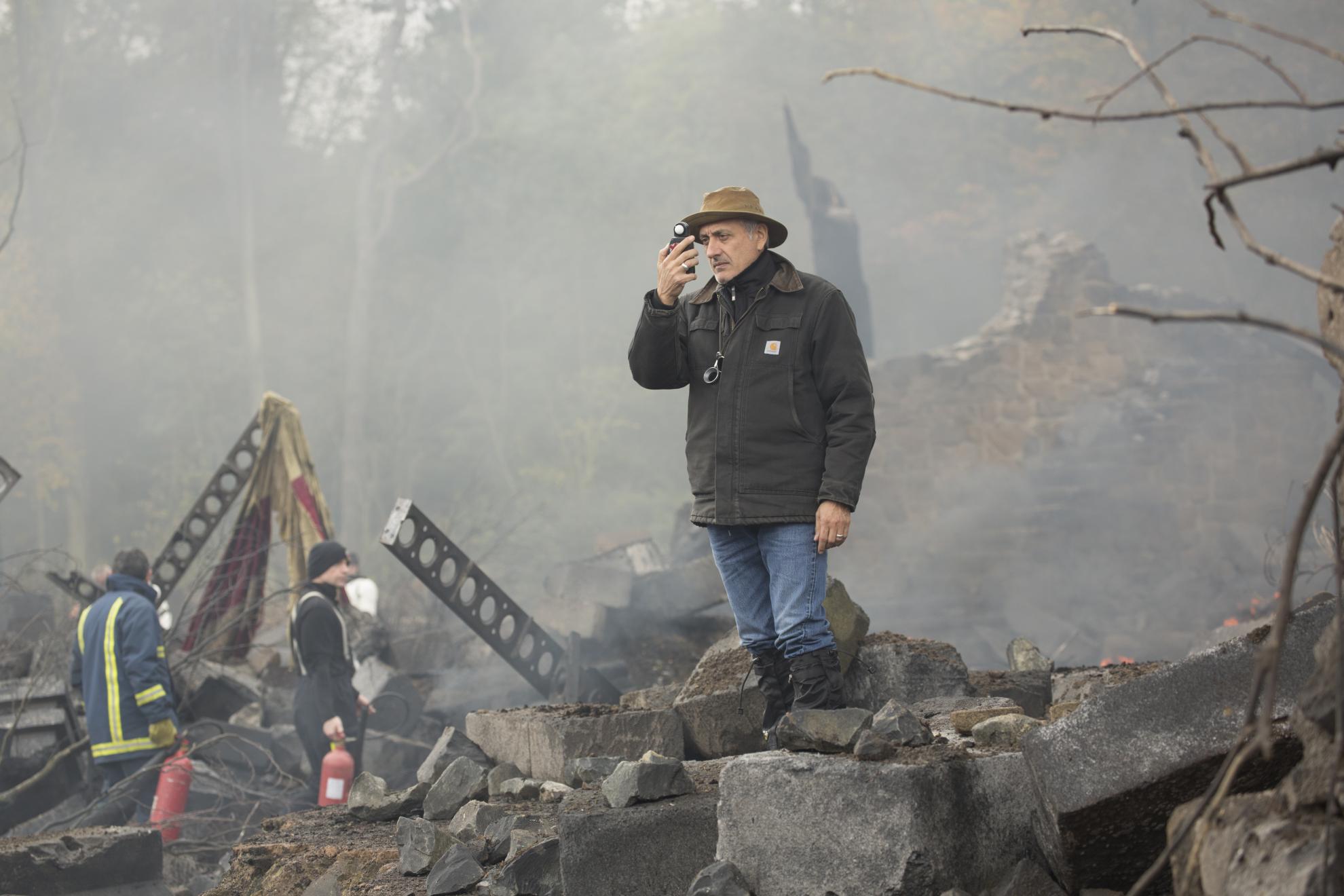 Cinematographer Dan Mindel, ASC, BSC, SASC was behind the camera for both The Force Awakens and The Rise of Skywalker. Speaking with Panavision from his home on Kauai, Mindel clearly recalls Episode IX’s last day, which took place on Stage 4 at Pinewood Studios, outside of London. Among other setups, the day’s work included shots of Finn (John Boyega) as well as portions of a flashback involving Rey and her parents (Jodie Comer and Billy Howle).

“No one wanted the day to end,” Mindel recounts. “It was an exciting day, but it was a sad day—it was genuinely really emotional. Working on a couple of these movies with the same crew and cast made for a very cohesive family experience. Everyone was very close.”

The conclusion of principal photography also brought one last gate check for the production’s Panaflex Millennium XL2 cameras. The nine-film saga finished as it began, with 35mm film rolling through a Panavision camera fitted with Panavision anamorphic glass. 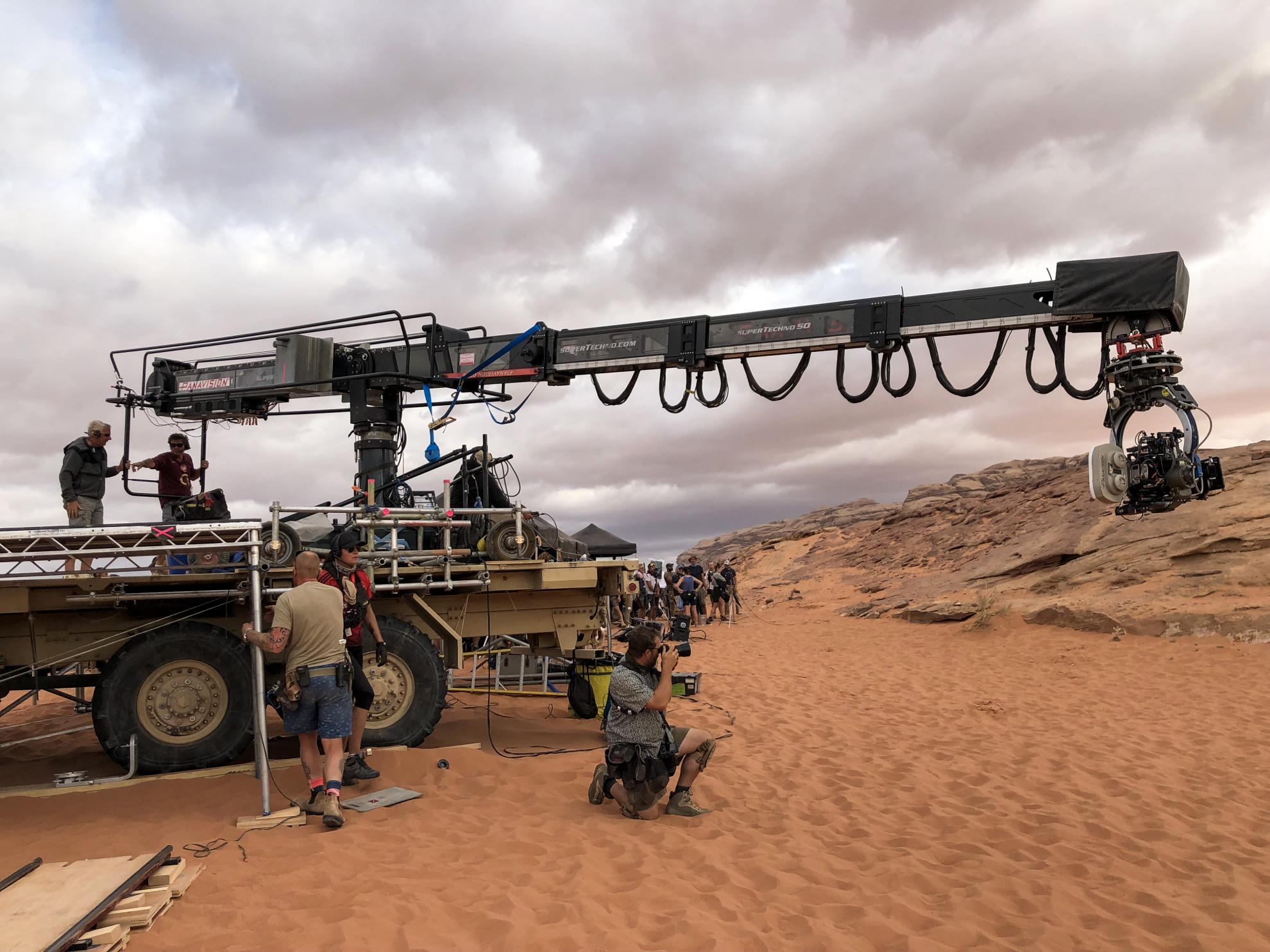 Production on the original Star Wars—released in 1977 and subsequently given the longer title of Star Wars: Episode IV – A New Hope—commenced on the salt flats at Nefta, Tunisia. On Monday, March 22, 1976, writer-director George Lucas called “Action!” for the first time on Star Wars, and a Panaflex camera rolled to speed for a scene outside of Luke Skywalker’s home on the desert planet Tatooine.

Cinematographer Gil Taylor, BSC had been tapped to shoot the original Star Wars. His camera package for the film included Panaflex No. 21, which had previously been used on such features as The Wind and the Lion, French Connection II, The Man Who Would Be King and The Secret Life of Plants. The filmmakers paired the cameras with C Series anamorphics.

After wrapping in Tunisia, the Star Wars production moved to the stages at EMI Studios-Elstree in Borehamwood, England, near London. That facility would also house the stages for the first sequel in the franchise, Episode V – The Empire Strikes Back, for which Lucas handed the directing reins to Irvin Kershner, with cinematographer Peter Suschitzky—later to join the ranks of the ASC—behind the camera. 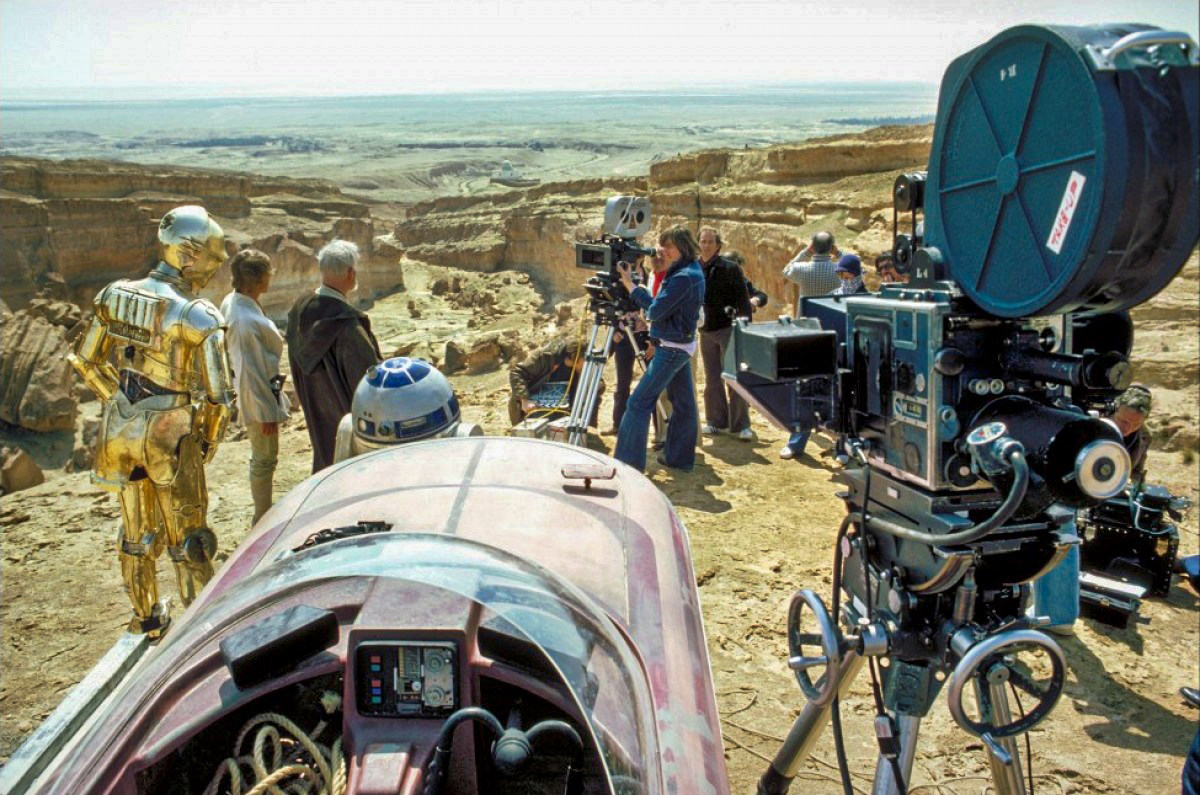 Suschitzky had interviewed for the original Star Wars, so he joined the sequel already knowing producers George Lucas and Gary Kurtz. “They were very keen that we should get the best possible result on the screen,” the cinematographer shared. “They said, ‘What do you want to test? Which cameras do you want to test?’ So I had total freedom to bring in any anamorphic system I wanted.”

Suschitzky’s final choice echoed Taylor’s, giving Episode IV and V a continuity of Panavision C Series anamorphic glass. “We used a combination of the PSR and Panaflex-X cameras,” Suschitzky explained. “Toward the end of the filming—for the last two or three months—we switched over to a normal Panaflex. We then used the Panaflex-X as a second camera.” 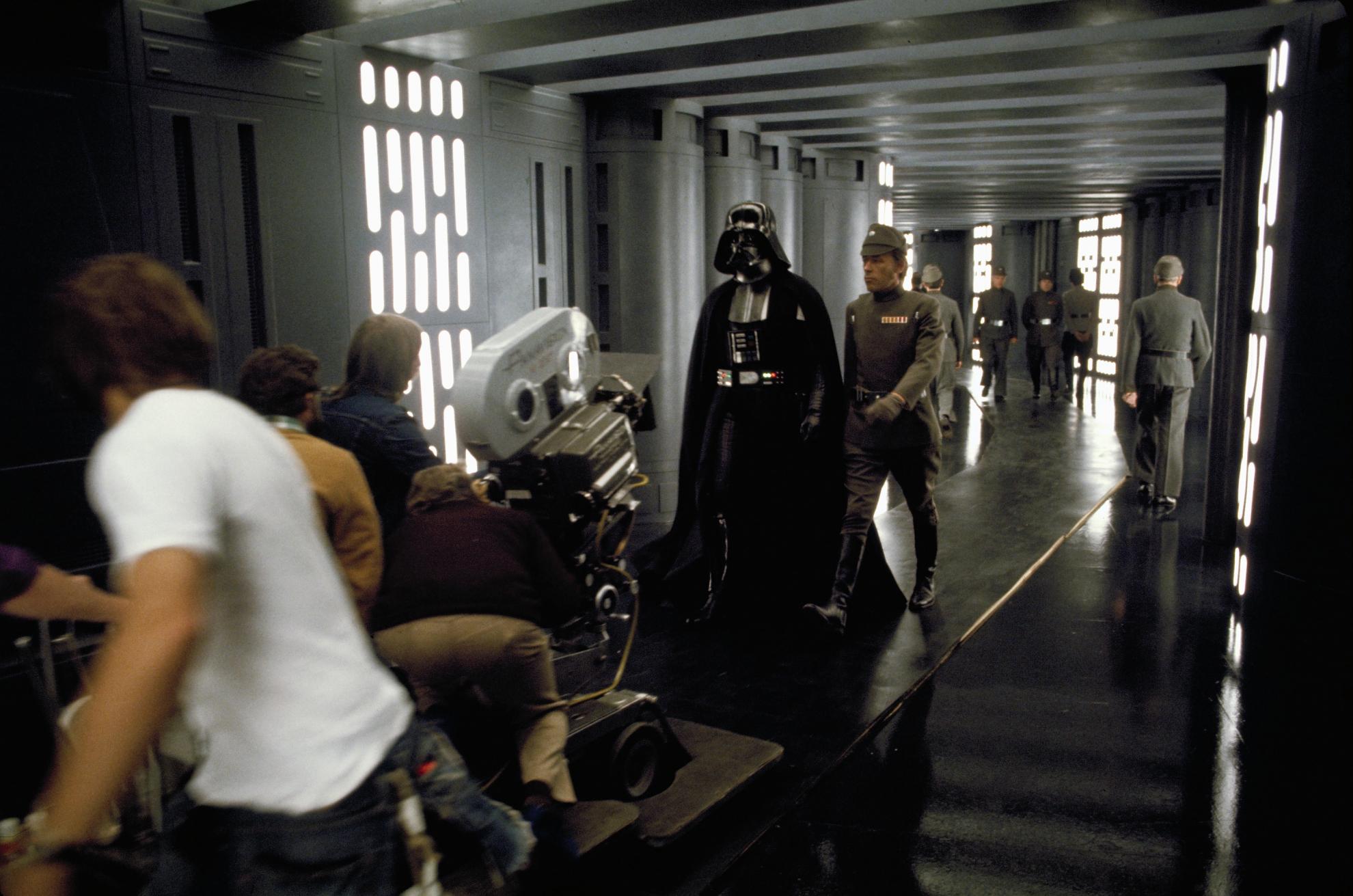 The original trilogy concluded in 1983 with the release of Episode VI – Return of the Jedi, which saw Richard Marquand assume the director’s chair, with Alan Hume, BSC serving as cinematographer. Following that film’s release, the movie saga was widely considered to be complete, but that changed in 1997, when Lucas released Special Edition versions of each film in the original trilogy, with updated effects, new shots and even new scenes.

The Special Editions served as a technological testing ground for the long-rumored “prequel trilogy,” which jumped back in time to tell the story of Luke Skywalker’s father, Anakin. Episode I – The Phantom Menace premiered in 1999, Episode II – Attack of the Clones followed in 2002, and Episode III – Revenge of the Sith concluded the trilogy in 2005. Behind the scenes, all three movies saw Lucas resume his place in the director’s chair, with David Tattersall, BSC serving as cinematographer.

Lucas initially hoped to be able to shoot all three prequel features digitally, but the production schedule for The Phantom Menace proved to be just ahead of the technological curve. The movie went into production with a traditional photochemical process, but behind the scenes, the race was on to make Lucas’ “digitally captured” dream a reality in time for Attack of the Clones.

“Panavision said they were interested in making the lenses,” Lucas explained. “So we got them together with Sony and said, ‘We want to be able to shoot Episode II with this [digital system]. That gives you about two and a half years. Can you get it done in time?’ And they replied, ‘Yup, we’ll do it.’ And they did.”

Panavision’s involvement in the project included Panavising Sony’s nascent HDW-F900 2/3” high-definition digital video camera, developing a new range of cine-style accessories for the camera, and designing and building the Primo Digital series of lenses, which were specifically conceived to offer double the resolving power of 35mm-format optics so that the 2/3” HD image would hold up on cinema screens. “This was a giant experiment for everybody, and nobody knew if it was going to work,” Lucas reflected. “Both companies really went out on a limb.”

The risk brought reward, and Attack of the Clones became the first major theatrical release to have been captured entirely digitally with 24p HD cameras. The main unit carried two Panavised F900s, with two more employed by 2nd unit. Tattersall’s primary optics for the movie were the 6-27mm and 9.5-105mm Primo Digital zooms. 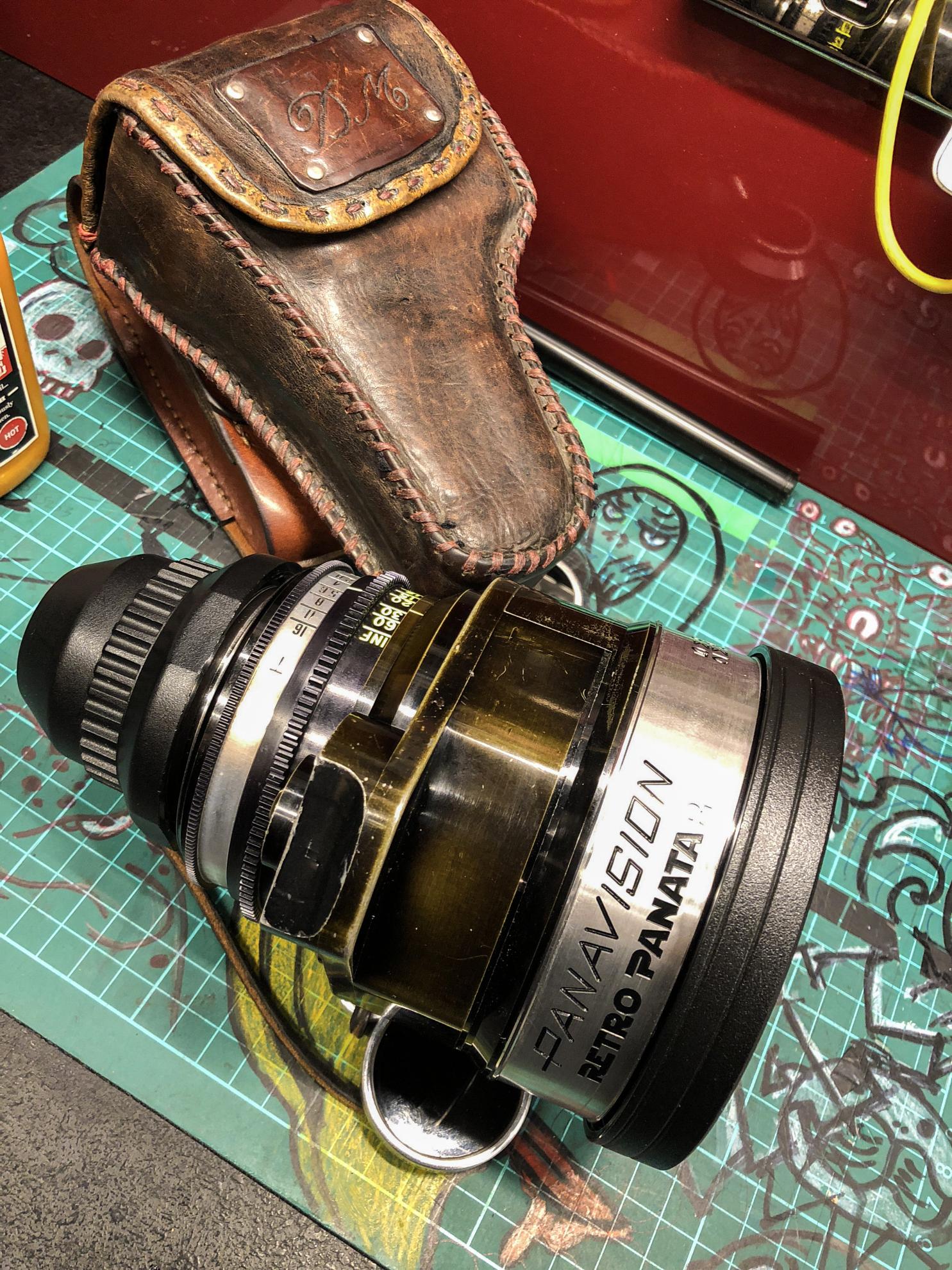 “24p was the first big jump that got HD closer to the film look by capturing the images at an equivalent 1/48 of a second,” Tattersall opined. “The next big jump was Panavision’s lenses, which are so much better than anything else we tested.”

The prequel trilogy’s bold step into the future of motion-picture workflows was balanced by the filmmakers’ desire to preserve the style of camerawork that had been established through the previous films. “To fly off on a tangent with another style would have really been wrong,” Tattersall said. “It’s a very solid, restrained style that’s definitely not flashy. George doesn’t favor cinematography that draws attention to itself, which leads to a more formal style.”

Lucas did allow for some stylistic evolution over the course of the movies, however. “In the past, the technology was not conducive to moving the camera, because I had a lot of effects,” he said following the release of Episode II. “Now I can move the camera a lot more. If you watch the Star Wars films, you’re watching the progression of learning to walk in the digital medium.”

When Disney acquired Lucasfilm in 2012, a new trilogy was soon underway, with Abrams tapped to direct Episode VII. From the outset, Abrams and his collaborators looked to the original trilogy as the template for The Force Awakens. “J.J. was totally adamant that we respect what came before us,” Mindel recalls, “not that we try to mimic it, but that we at least pay homage to it.”

That homage to the original trilogy included a return to film acquisition. “I think that gave us an advantage in terms of the visual palette, simply because of the texture and the ambience that you gain with film,” Mindel offers. “It’s like opening a good bottle of wine or reading a good book: Once you see the first frame, you’re hooked. And you’re hooked because of film’s texture and ambience, which brings an authenticity to the story.” 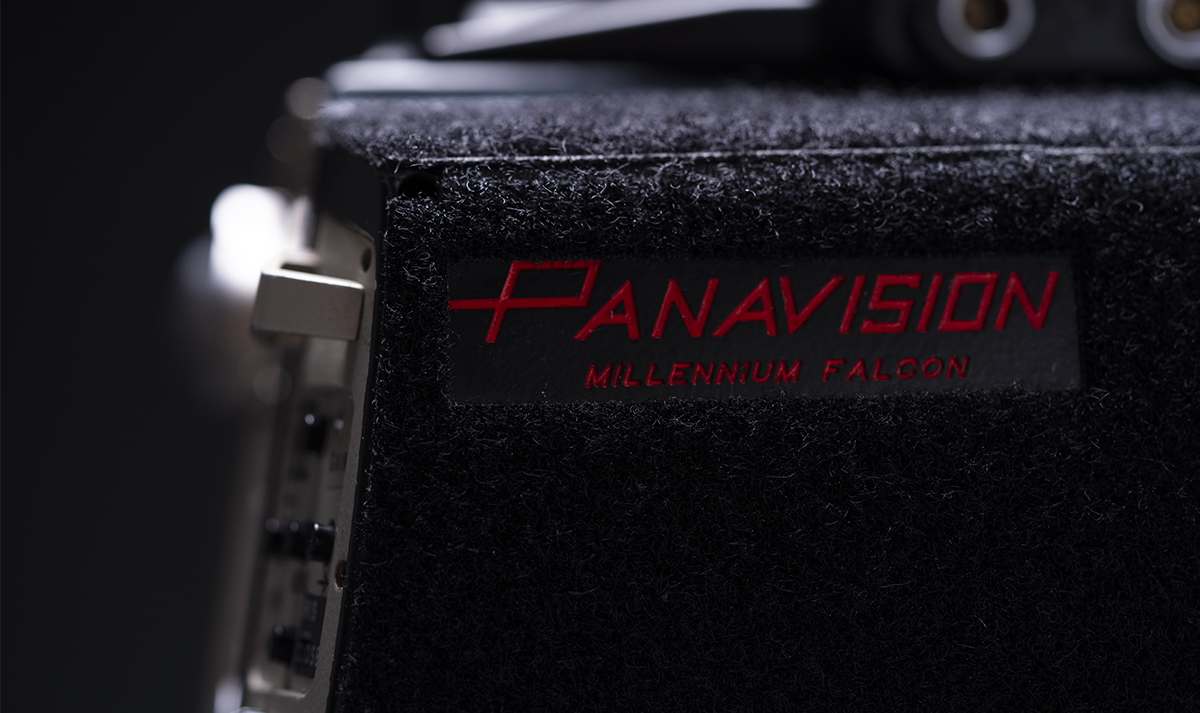 In another tip of the cap to Episode IV and V, Mindel turned to Panavision for his cameras and lenses. The A and B cameras were a pair of Millennium XL2s painted matte black and dubbed “Millennium Falcon” and “Death Star,” respectively; for his optics, Mindel primarily combined Primo anamorphic primes, which he used to shoot Kylo Ren and his associates, with a new set of Retro C primes that he used for Rey and her cohorts.

Developed by Dan Sasaki, Panavision’s senior vice president of optical engineering, the Retro Cs emulated the tone of vintage C Series glass while producing a sharper image with more contrast. “The coatings we applied gave the images certain warmth, and the space between the elements contributed to a different roll-off,” Sasaki explained, adding that Mindel sought “a 1970s-look lens, but he didn’t want any of the artifacts associated with ’70s technology—edges that fall off at the top and bottom, for example. He wanted a classic, modern, reliable quality of lens, but a lens with personality to it that some of the older coatings and film technology back then offered.” 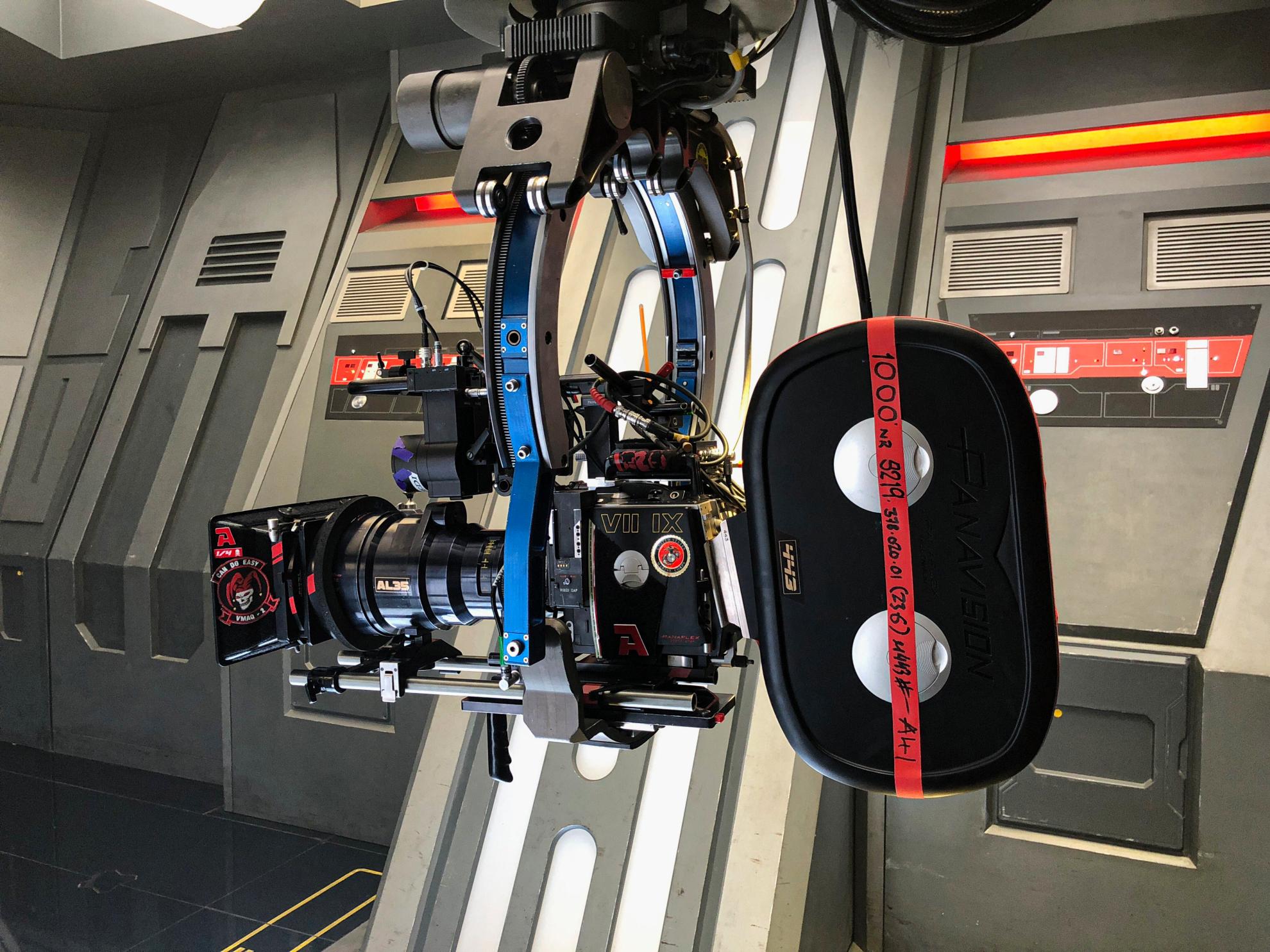 Abrams and Mindel returned to bring the saga to a close with Episode IX. “By the time we got to this last movie,” Mindel says, “the handcuffs were more or less off in terms of what we did and how we did it, but I think we kept true to the filmmaking ideals that were used in the beginning, whereby we were very careful with our storytelling etiquette. We didn’t go completely contemporary.

“I think it’s our job to not keep repeating the same thing over and over again,” he adds. “In order to bring some length and breadth to the film, we have to keep pushing ourselves. We’re honoring the story by trying to revitalize our methodology. But I didn’t ever want to break the mold that was set for us—I just wanted to enhance it a bit.” 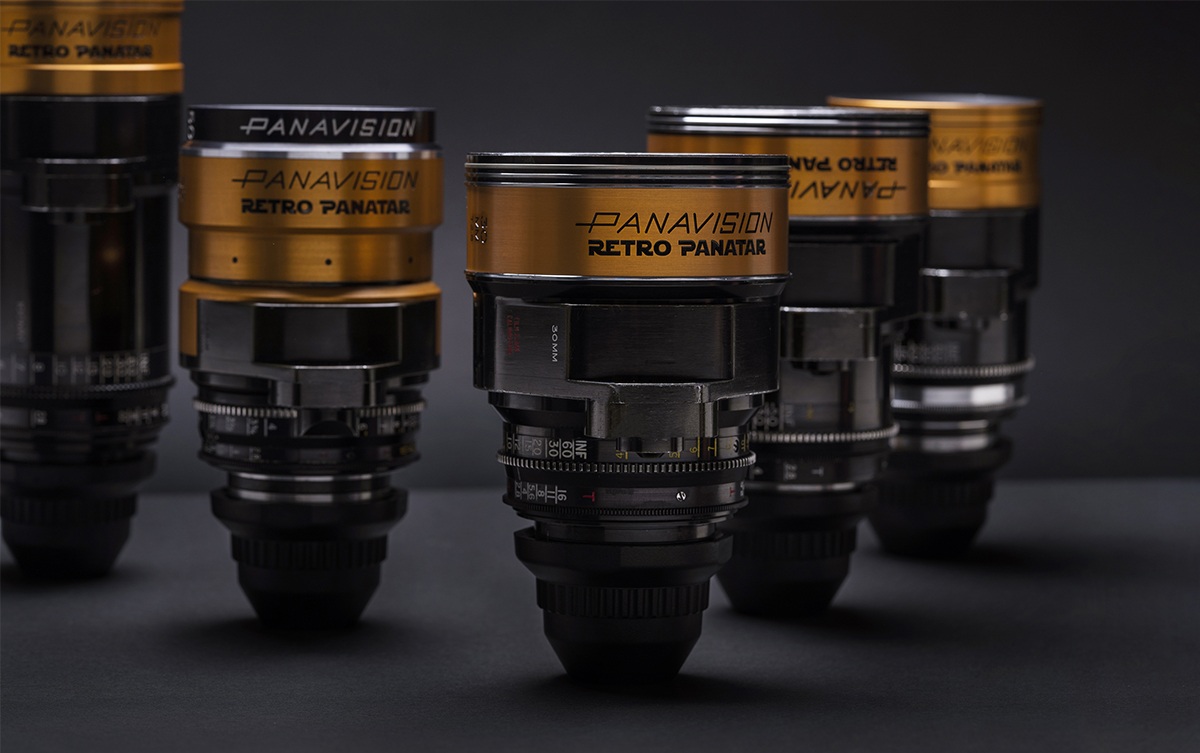 As he had done on The Force Awakens, the cinematographer again assigned Primo Anamorphics to the movie’s villains, and this time used Retro C and Retro Panatar lenses for the heroes. The Retro lenses, Mindel says, “were a new set that Dan Sasaki made for us. We learned a bit about the lenses on VII, and I was able to go back to him and say, ‘I want a bit more of this or a bit more of that.’ And then we also used the T Series, because they’re smaller, for handheld and Steadicam.

“The whole 35mm package is so easy to use, ergonomic, and tried-and-tested,” Mindel adds. “It just suited us right down to the ground.” Particularly when faced with a project as complex as Episode IX, that comfort level with the equipment provided welcome peace of mind that was further enhanced by Panavision’s support. For example, Mindel notes, “When we were shooting in Jordan [for scenes set on the desert planet Pasaana], we had a Panavision rep with us 24/7 maintaining the cameras and lenses. That support is massive.”

That Episode IX was his second trip to the galaxy far, far away didn’t dull Mindel’s awareness that he and his collaborators had been charged with bringing the 42-year-old Star Wars story to a final conclusion. “Sometimes you have to slap yourself and go, ‘This is real—this is your life, and you’re living it,’” the cinematographer reflects. “What an amazing opportunity. I’m very proud to have been a part of any of it, let alone two of the movies.” 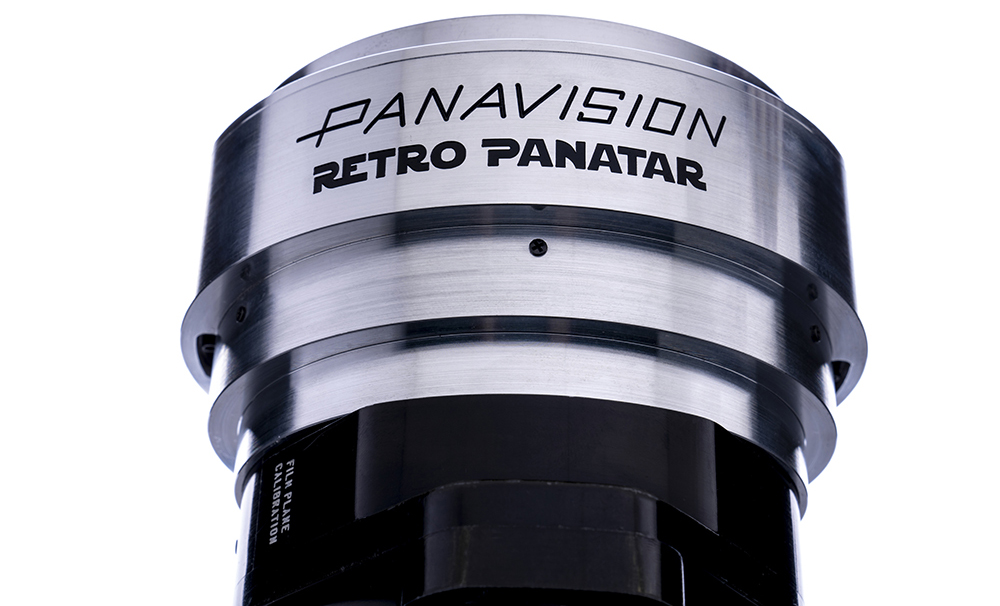