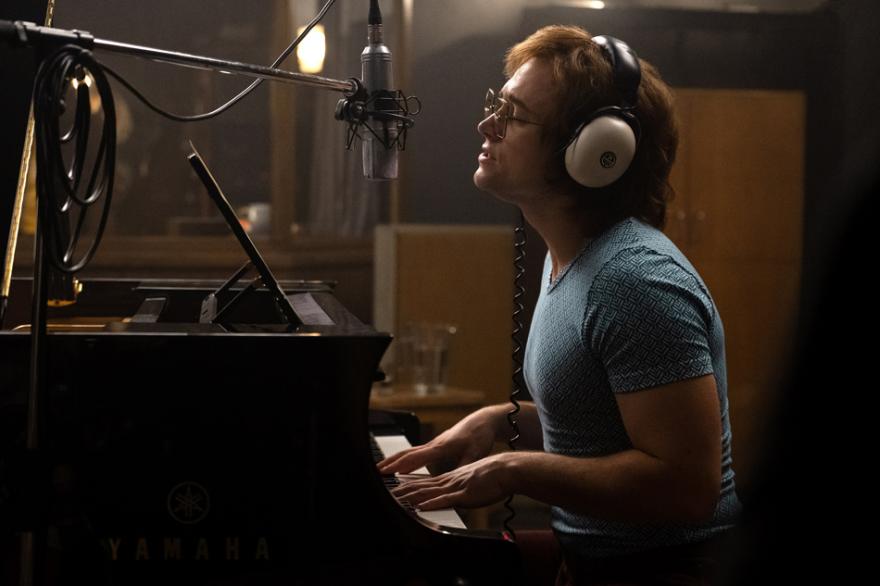 Elton John’s larger-than-life, rags-to-riches story is given the musical treatment in the new movie Rocketman from Paramount Pictures. The film is depicted as “a true fantasy” even though the script doesn’t shy from some of the more rock ‘n’ roll aspects of the British superstar’s lifestyle. 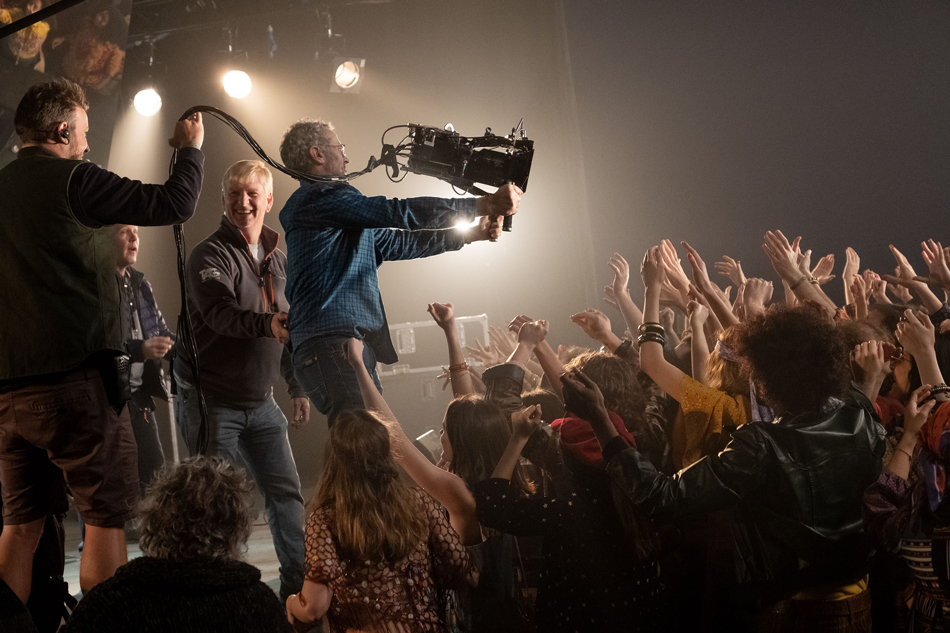 DP George Richmond on the set of Rocketman.

“The stress on fantasy really allows you to go into the musical side of things and to push the use of fantastical images to tell the story,” says George Richmond, BSC, who reteams with director Dexter Fletcher from Sunshine on Leith (2013), a musical set to tracks from Scottish band The Proclaimers.

This is Richmond’s third musical counting his experience as a camera operator for Dion Beebe, ASC on Rob Marshall’s Nine in 2009. While Nine was shot on film using spherical lenses from Panavision, Rocketman, was shot with a Panavised ARRI Alexa and G Series anamorphic lenses arranged at Panavision London.

“Now that I’ve shot three, I find musicals one of the most fun forms of filmmaking,” says Richmond whose cinematography credits also include Eddie the Eagle and Tomb Raider (2018). “Everyone seems to enjoy their craft, and it’s most enjoyable for me to be able to listen to the music and try to move the camera to the rhythm.” 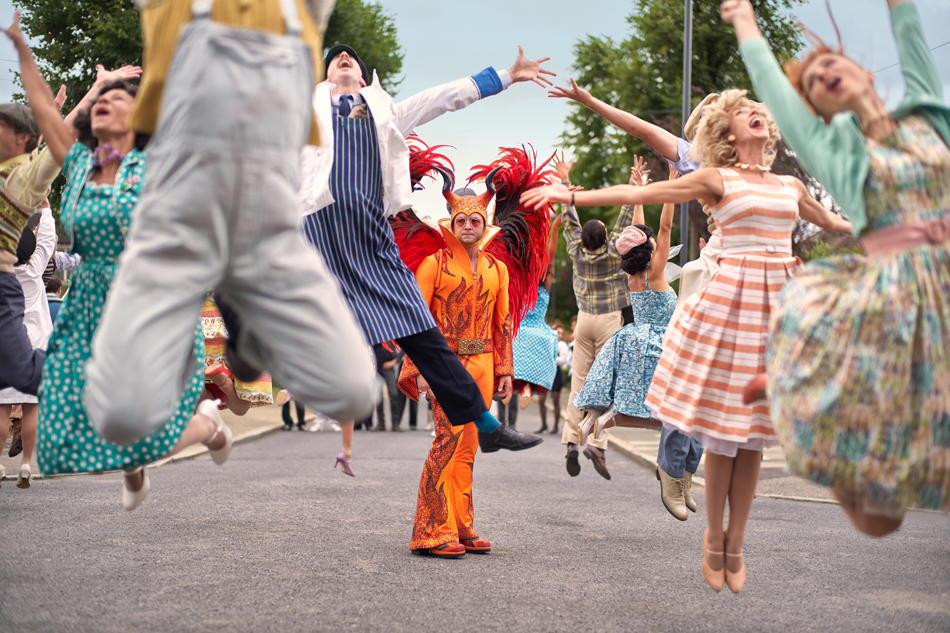 He adds, “There were some terrific ideas in this script too including a great character arc for Elton as a 6-year-old, through his struggle with addiction and fame, to coming out of rehab. The way the script is structured with scenes of rehab at the beginning and end, and at various points in between, allows you to jump into whatever time period you want to tell the story.”

The screenplay by Lee Hall (Billy Elliot) charts the pop icon’s early years as a working-class north London lad, then as a prodigy at the Royal Academy of Music. The story follows his eventual musical partnership with songwriter Bernie Taupin, and his preparations to release Honky Château, his 1972 breakthrough album.

While needing a lightweight camera to assist in the fluid camera moves he was plotting, Richmond’s principal criteria in acquisition was to “buck the trend” of filming with large-format cameras. 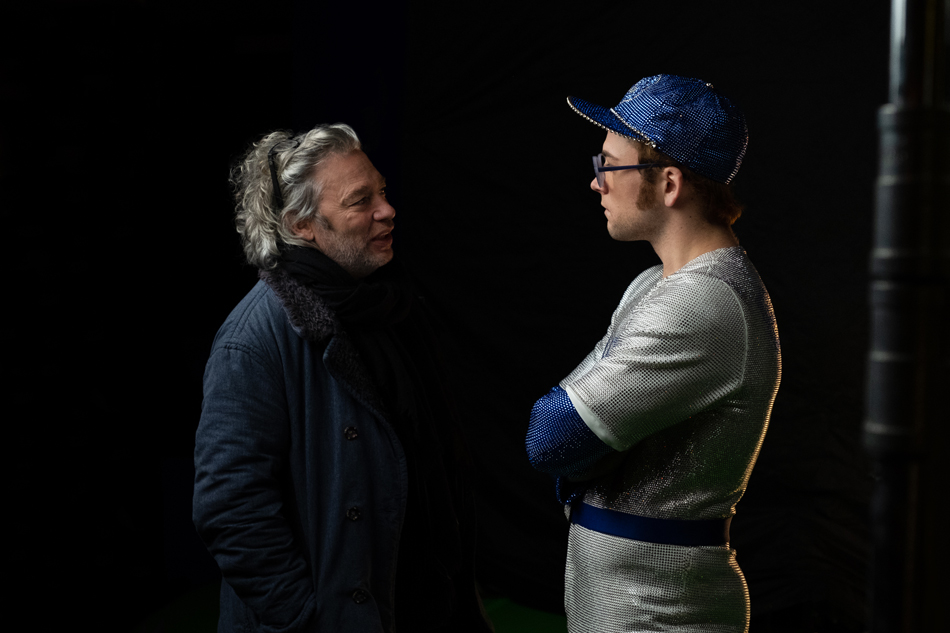 “I wanted to try to create an image more in keeping with how we remember the 1950s to 1970s period, by not putting too much information (resolution) into it.”

He selected to work with the Super 35 chip of the Alexa Mini shooting ARRIRAW 2.8K for the anamorphic and open gate 3.4K for the VFX spherical footage.

“The other key decision was to shoot anamorphic,” he says. “I’m a great fan of anamorphic. You can infuse a sense of period into the project just by the lens choice but when we combine Panavision G Series lenses with the amazing set design, lighting design and costume design of Rocketman then it makes my job a lot easier.”

Rather than song and dance numbers, Rocketman features a number of narrative-led fantastical set pieces for which Richmond devised complex, fluent camera moves.

The sequence choregraphed for the song “Rocket Man” is the film’s center piece. “It begins with Elton at his party popping pills and drinking booze, then he throws himself into a swimming pool, sinks to the bottom of a now impossible large underwater space and sees a younger version of himself singing back at him. He’s pulled out of the pool, and we see him in an ambulance singing snatches of the song as medics try to put an oxygen mask on him. In a space that resembles the loading area of a hospital, his stomach is pumped of pills. We transition into some fantastic industrial space where he gets undressed and changed in a graphic silhouette with the LA skyline in background. Then, suddenly, we’re out into the Los Angeles Dodgers stadium where Elton begins to sing and then goes up like a firework and explodes. You can imagine how much fun it was to create those images, which looked terrific with the anamorphics,” he says. 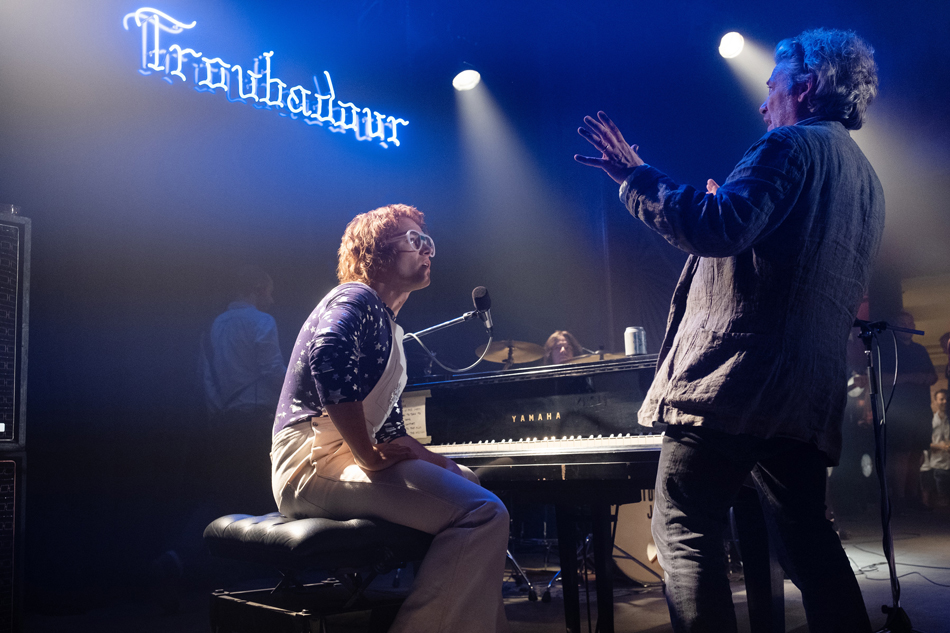 Richmond’s focus puller, Dave Cozens, worked with Panavision London to have correctors/shims added to the wide G Series to reduce the falloff on the top and bottom portions of the frame.

“Generally, when shooting wide open on the wide anamorphics you get focus aberrations on the outside of the frame but with careful calibration you can tune those aberrations out of the top and bottom but leave them on the side. That allows you to increase the amount of useable focus when shooting wide or close to actors – so the top of their heads, for example, are not out of focus – while retaining faster fall off at the sides for a vintage anamorphic look.”

Another sequence set to “Saturday Night’s Alright for Fighting” was conceived as a single long-shot and required considerable preparation. It starts out with Elton in a pub, moves with him outside into an alley, through a fence then into and around a funfair populated by crowds of (1960s gangs) Mods and Rockers where a fight breaks out. It then tracks back the same way to settle Elton once more in the pub. The sequence is used to transition Kit Connor, who played 12-year-old Elton to Egerton playing Elton as a young man.

Richmond explains that the camera was mounted on a Stabileye head attached to a straight 4-foot-long metal bar and carried through the sequence by key grip David Appleby and camera B grip Craig Sheils.

“This allowed us to move the camera from ground level to full reach during the shot and it is small enough so as to be discreet, very mobile and not in the way of the lighting,” he says. “It’s stabilized but gives a slight handheld life to the shot.” 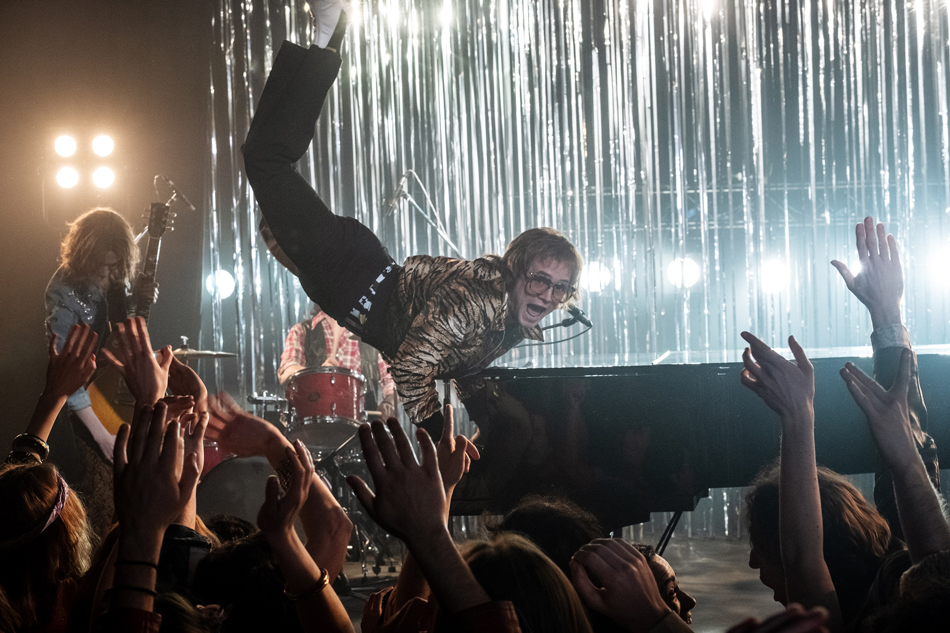 For the finale to the defiant song “I’m Still Standing,” Egerton was shot digitally to blend in with 16mm footage of the original 1983 promo which was shot in Cannes and directed by Russell Mulcahy.

“The original intent was to shoot our own version of the promo, but in what was a really clever idea from Dexter and Matthew (producer Matthew Vaughn), it was felt to be more playful to use the original negative of the video and use the selected shots required. The 16mm rushes were de-noised to remove all grain.

“We shot Taron against bluescreen with matched lighting and superimposed him on top of Elton and painted out the elements that didn’t work. A small amount of grain was then added at the end to help it all sit in.

“It’s a fitting end to Elton’s journey whom we have seen rise to fame, his deterioration into addiction and then coming out the other end triumphant.”