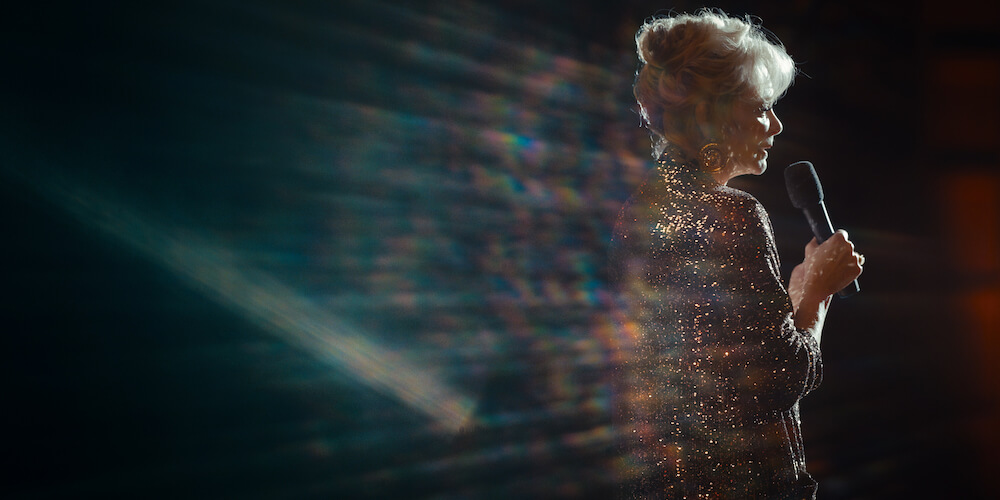 In Season 1 of the HBO Max original series Hacks, legendary but no longer irreplaceable Las Vegas comedian Deborah Vance (Jean Smart) and “canceled” television writer Ava (Hannah Einbinder) reluctantly agreed to work together in a last-ditch bid to resuscitate their careers. Despite their initial misgivings, their collaboration proved a success, and in Season 2 they embark on a cross-country trek to workshop new material for Deborah’s act — and to continue workshopping their personal lives.

Created by Jen Statsky, Paul W. Downs and Lucia Aniello, Hacks has been photographed from the beginning by cinematographer Adam Bricker, whose work on the show has garnered two Primetime Emmy nominations (for the Season 1 episode “Primm” and the Season 2 episode “The Click”) and an ASC Award nomination (for the Season 1 episode “There Is No Line”). Bricker turned to Panavision Hollywood for his camera and lens package, opting for Panavision’s Millennium DXL2 on Season 1 and Panavised Red V-Raptors on Season 2, with modified Primo 70 optics in front of the cameras for both seasons. The cinematographer recently spoke with Panavision about his approach to shooting the series’ 18 episodes to date. 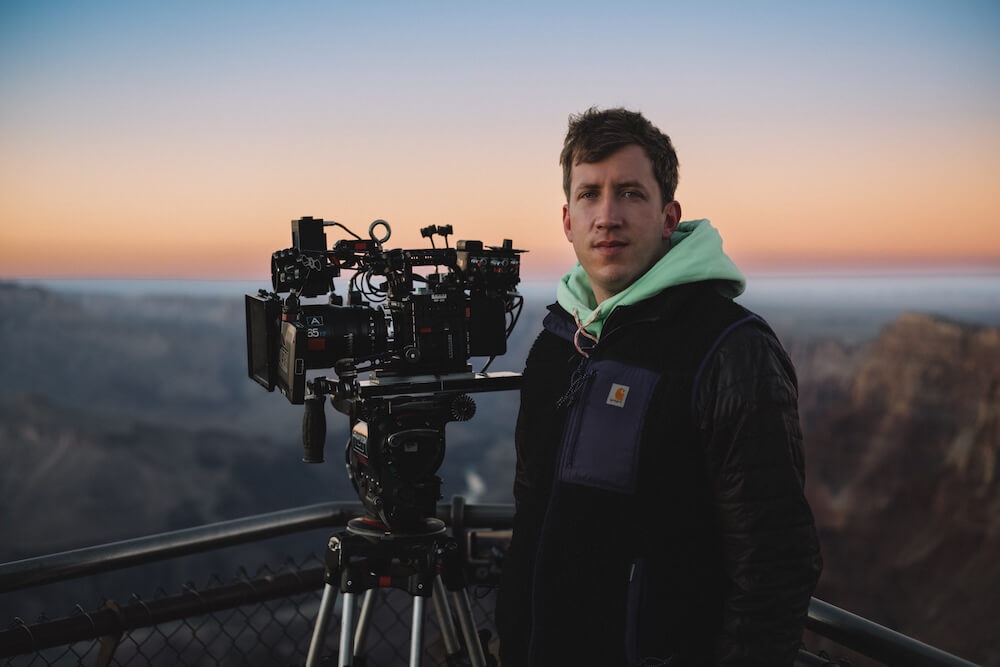 Panavision: How did you come to be involved in Hacks? What drew you to the project?

Adam Bricker: From the first page of the pilot, I could tell Hacks was operating on another level. It opens with a fast-paced, energetic oner that introduces us to the glamorous Las Vegas world of Deborah Vance, but soon pivots to the quieter, lonelier side of her fame. It’s rare to find a half-hour comedy so rich with character-motivated visual storytelling, so I was thrilled when I got the opportunity to meet with Jen, Paul, and Lucia. We shared a similar sensibility from the get-go, and I was honored when they brought me on board. Lucia Aniello has also directed 11 of the 18 episodes to date, including the pilot. How would you define the look that the two of you sought to create with Season 1?

Bricker: In that first meeting, we all agreed that comedies can be shot cinematically; they don’t need to be bright or adhere to a certain look to emphasize a joke. If something is funny, it’s funny. We were interested in using the cinematography to underscore our characters’ emotional journeys and enhance the storytelling wherever we could.

Lucia’s foundational visual references were a reflection of that ethos. She recommended I watch Judy, shot by Ole Bratt Birkeland, BSC, a film in which the lighting beautifully reflects the character’s emotional state, and Bergman’s Persona, for compositional inspiration. Lucia also wanted the look of Deborah’s life in Vegas to have a nostalgic quality, and we both loved Soderbergh’s Behind the Candelabra, which became another important touchstone. Building off those films, I put together a look-book that helped establish our visual language and that we could refer to throughout the shoot. 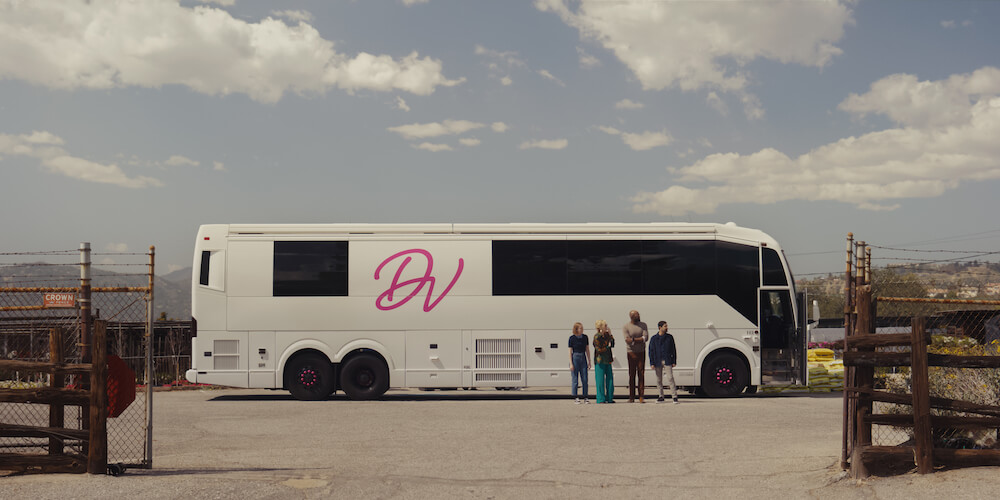 Season 2 takes the show on the road. Did the introduction of new environments lead to any particular evolutions in the look or your approach to shooting the series?

Bricker: Whereas Season 1 was about the grandiosity and glitz of Vegas, Season 2 was about Deborah getting back to her roots, taking us into the dive bars and small comedy clubs where she workshops her new material and, of course, the tour bus that is her chariot.

Shooting in the tight confines of the tour bus presented a fun creative challenge. First, we downsized our camera body to a Red V-Raptor to save space. We were actually the first major production to shoot on the Raptor, and Panavision machined a suite of custom accessories to accompany it, which is something I’ve always loved about Panavision — they don’t just buy things, they build them. 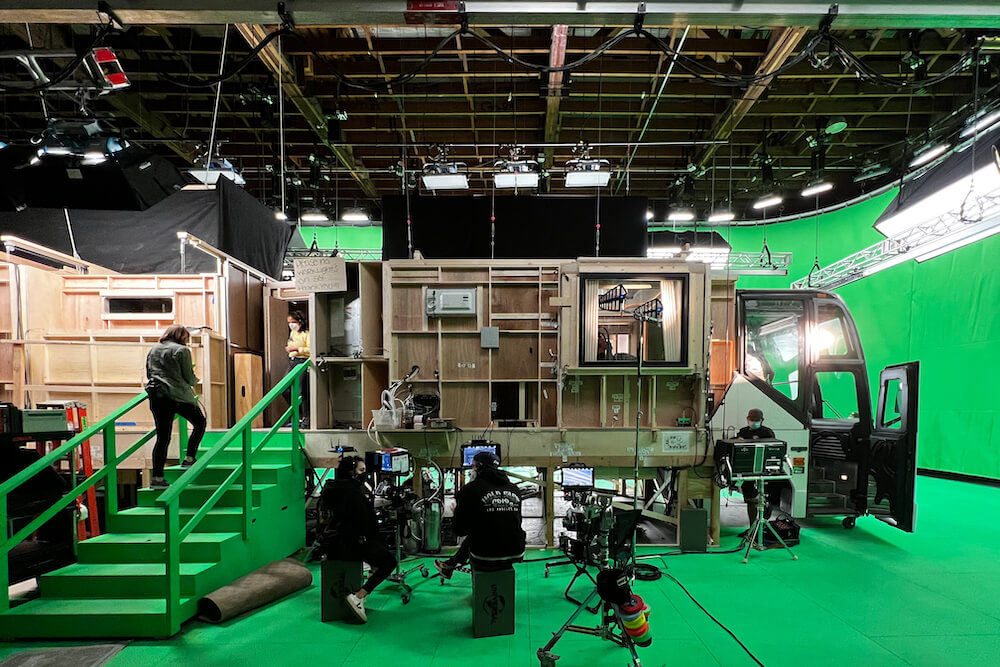 Then our art department, led by production designer Alec Contestabile, built a replica of the tour bus interior on our stages at Universal. I was looking for ways that we could realistically convey motion on this stationary set. I rode around on tour buses during prep, photographing the interiors as a light study. Chief lighting technician Daniel McNutt and key grip Randy Garcia were able to use those findings to program and rig concert movers to mimic the natural bounce and play of sunlight through a vehicle speeding down the interstate.

Lucia, Paul and Jen also made key strategic choices which helped add so much depth, texture, and atmosphere to our visuals. Though we mostly shot in and around Los Angeles, we took Jean, Hannah and a skeleton crew to the Grand Canyon to shoot at sunrise for a pivotal scene. We then sent second-unit DP Charlie Hoosier Panian on a road trip to film the actual tour bus as it drove through some iconic American landscapes, and his gorgeous frames made it feel like that bus was all over America, because, in a way, it was. In combination with every department’s exceptional work, all of our visuals reinforced the sense of perpetual motion our characters find themselves in this season, both literally and emotionally. 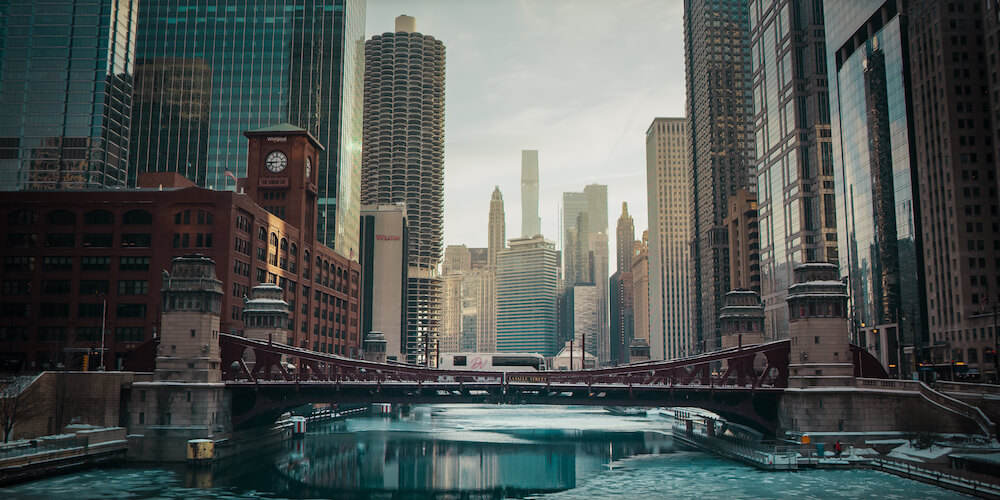 How did you first start working with Panavision, and what brought you to Panavision for Hacks?

Bricker: I first connected with [marketing executive] Rik DeLisle at Panavision Hollywood when I was embarking on the indie feature Happily. It was a passion project with big ambitions and a very limited budget, but Panavision could not have been more supportive of what we were trying to achieve in the film.

Shortly thereafter I found myself back at Panavision for the second season of the show Sorry for Your Loss, which I was inheriting from DP Xavier Grobet, ASC, AMC. He shot the first season on a DXL2 and had worked with Guy McVicker [who now serves as technical marketing manager at Panavision Woodland Hills] to customize a lens package, which set the look.

I loved meeting Guy — he is a true wealth of optical knowledge — and learning about the infinite creative options for customizing lenses. It was exciting and inspirational, and I had fun shooting with the package he had developed with Xavier. So when it came time to choose our lensing for Hacks, I knew I had to reach out to Guy and see what we could do. 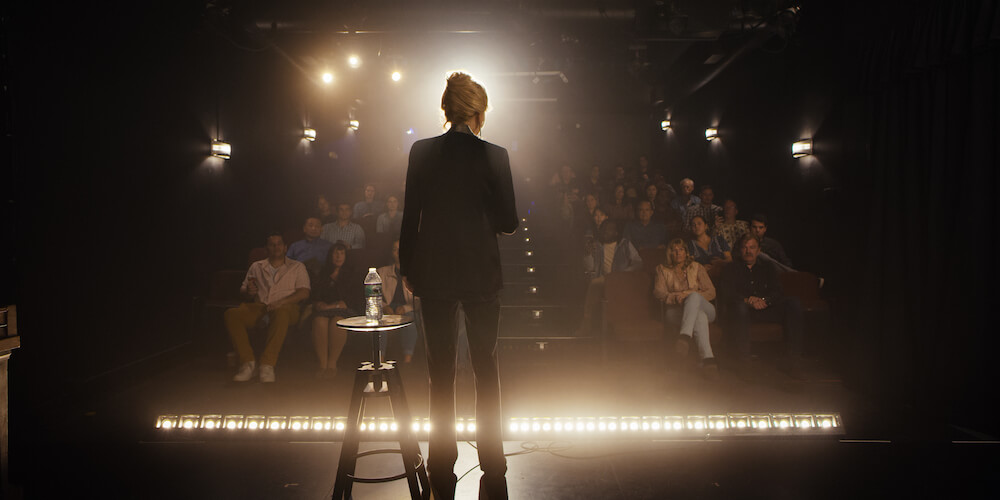 Lucia and I wanted a vintage look inspired by our Judy and Behind the Candelabra references, but we were concerned about trying to work with vintage glass on a fast-paced TV schedule. Guy suggested we customize a set of Primo 70s, which helped us capture the look we wanted while reaping the benefits of modern-day optics. After some testing and tweaking, Guy perfected the ‘recipe,’ giving us lenses that emulated our touchstone films — softening highlights, adding bloom and warming the flares. Finally, in an eleventh-hour stroke of genius, Guy encouraged us to add a rainbow flare, which wound up being one of the signature visual aspects of Deborah Vance’s Vegas performances. It’s such a cool process because you end up with lenses that are unique to the project, and that is very special. 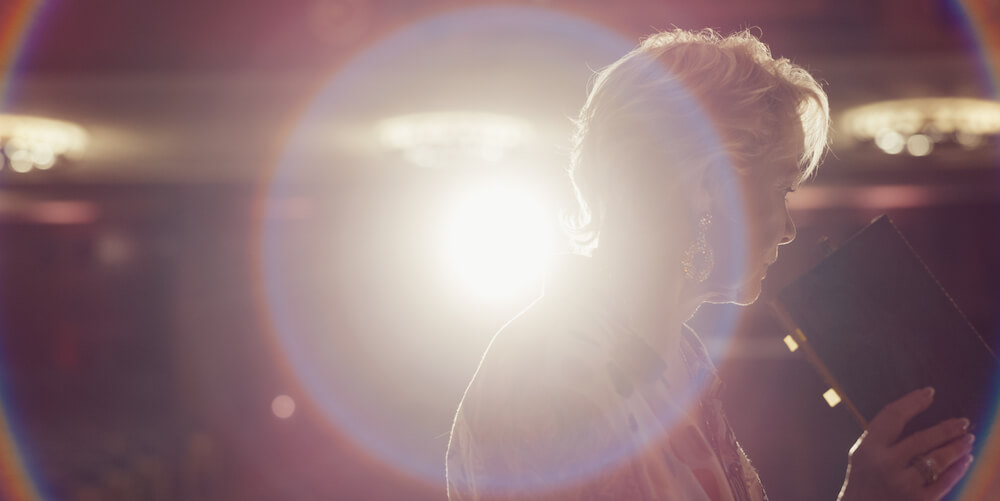 Do you see a throughline between your work shooting documentaries like Chef’s Table and your narrative projects?

Bricker: I like to take a character-driven approach to cinematography and have been so fortunate to collaborate with writers, producers and directors who prioritize the same. Whether the ‘characters’ are chefs in an unscripted food documentary or a stand-up comedian in a half-hour scripted comedy, their emotional journeys are what inspire me and are always worthy of the cinematic treatment. I try to keep that core concept as my North Star in all of my work. 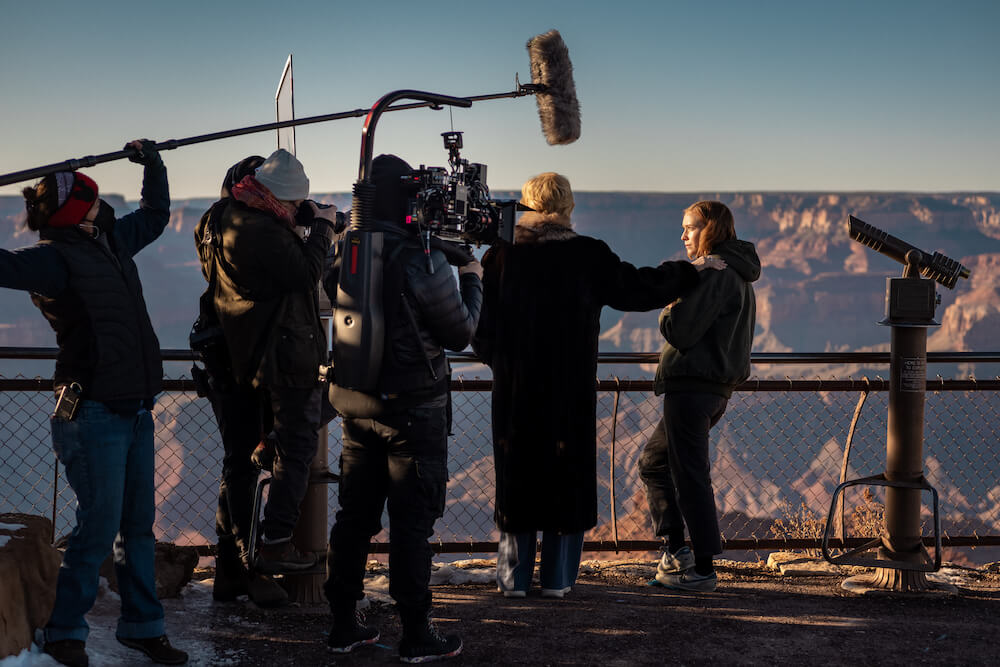