Tommy Maddox-Upshaw, ASC embraces the opportunity to craft a layered visual language for Showtime’s science-fiction series The Man Who Fell to Earth.

After years of shooting television dramas like Snowfall and Empire, cinematographer Tommy Maddox-Upshaw, ASC longed for a project that explored the mysterious and fantastic realms of science fiction, as he was a longtime fan of the genre. In the fall of 2020, he met with writer-producer Alex Kurtzman about the series Star Trek: Strange New Worlds, and the two immediately hit it off. But, instead of Star Trek, the job that came out of the meeting was a passion project Kurtzman and writer Jenny Lumet had been developing based on Walter Tevis’ 1963 sci-fi novel, The Man Who Fell to Earth, which had been previously adapted into the acclaimed 1976 film directed by Nicolas Roeg, shot by Anthony B. Richmond, ASC, BSC, and starring the iconic David Bowie.

Maddox-Upshaw connected with Kurtzman and Lumet’s take on the material and their choice to make the lead characters Faraday (played by Chiwetel Ejiofor) and Justin Falls (Naomie Harris) both Black. “I thought that Alex and Jenny did a great job of writing and putting these Black people in the sci-fi space in quite a beautiful way that followed in the steps of Bowie, who was a very worldly person,” the cinematographer says.

When the series was greenlit in December 2020, Maddox-Upshaw and Kurtzman began planning the look of the show via Zoom meetings. They didn’t want to duplicate or re-invent the visual style of the 1976 film, and their references often veered far from classic sci-fi films and series. Instead, they found inspiration in more realistic works, such as cinematographer Joshua James Richards’ portraiture in Nomadland, the mixed-source lighting James Laxton, ASC employed in Moonlight, the desert palette Adrian Biddle, BSC accentuated in Thelma & Louise, and Roger Deakins, ASC, BSC’s outdoor compositions in No Country for Old Men. The aesthetic of these films better matched the grounded style Kurtzman and Maddox-Upshaw envisioned for The Man Who Fell to Earth. “The show is not straight sci-fi,” Maddox-Upshaw says. “It’s more like a dramatic show in the sci-fi space.”

To achieve this naturalistic look, Maddox-Upshaw decided to go with a large-format image, but one that would be “rougher,” reflecting the gritty New Mexico desert where Faraday and Falls first meet each other. So he asked for advice from his contacts at Panavision, with whom he’s had a strong working relationship since 2004, his final year as an MFA film student at the American Film Institute. “Panavision graciously donated me a camera for my thesis film, and that was a game changer,” he remembers. “Subsequently, they helped me on my early music videos and different things of that nature. Panavision's also been very supportive on my international work outside of the U.S.”

Panavision’s senior vice president of client relations and business development, David Dodson, connected Maddox-Upshaw with Dan Sasaki, senior vice president of optical engineering and lens strategy, and Guy McVicker, director of technical marketing, who shared that they were in the process of creating a prototype series of large-format spherical primes that might fit Maddox-Upshaw’s needs. “There was a progression from late 2020 to early 2021, where Dan and Guy got a recipe that I liked for the lenses,” Maddox-Upshaw says. “I tested it out until probably February, and then Dan started making the lenses, and Panavision had two sets of them shipped out to London.”

While The Man Who Fell to Earth is set primarily in the United States, the production was shot in the United Kingdom and Spain. In fact, though both Maddox-Upshaw and Kurtzman live in Los Angeles, because of the coronavirus pandemic “we had never met physically until we got to London,” Maddox-Upshaw says. Yet their virtual collaboration over Zoom had created such a strong bond between the two filmmakers that when Kurtzman had to briefly return to the U.S. for a family commitment, he asked Maddox-Upshaw to scout locations in Spain on his own. “Alex didn't have to do that at all,” the cinematographer reflects. “But because we had been connected in terms of what we liked aesthetically and what we knew the story to be emotionally, he let me scout without him, just sending a few pictures back at times. That was a big testament in terms of our friendship on a first-time collaboration. It really gave me confidence moving forward.” 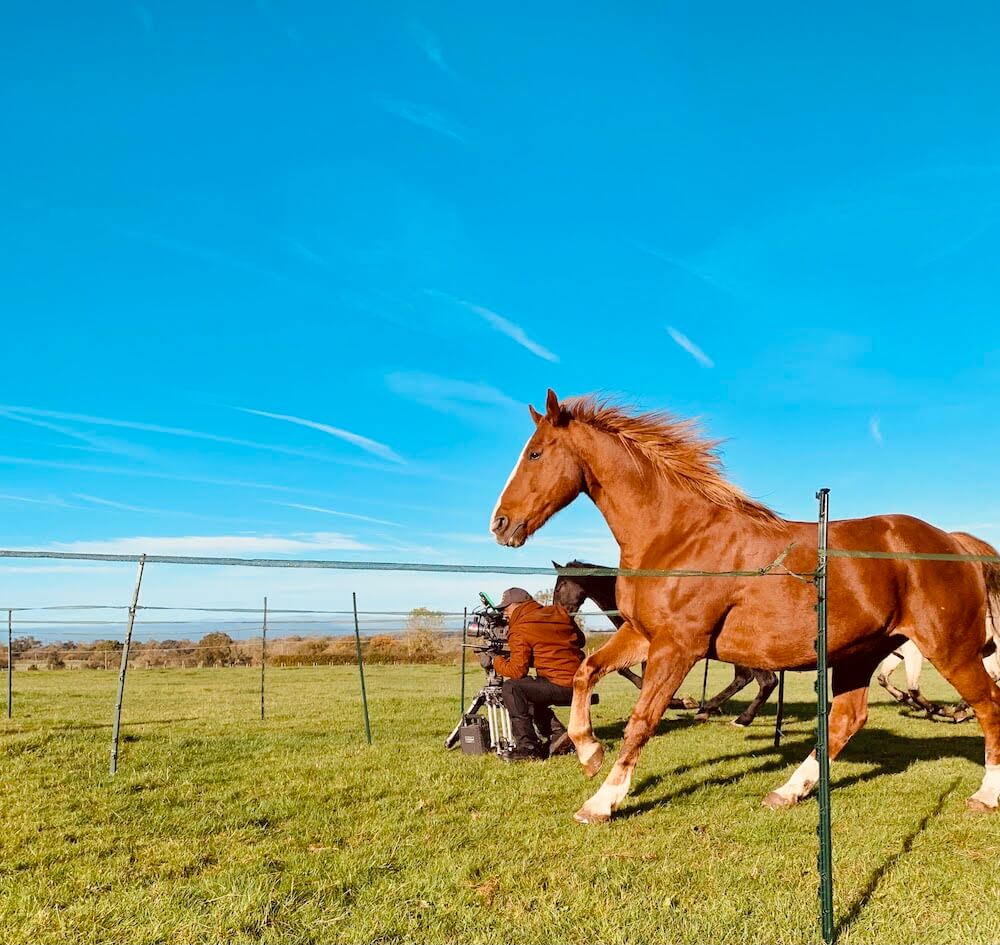 Spain’s Tabernas Desert — once the heartland for many spaghetti westerns in the 1960s and ’70s — doubled for Los Alamos, N.M., where the alien Faraday crashes and encounters Justin Falls, a brilliant physicist who has fallen from grace in her field. The spherical prototypes were Maddox-Upshaw’s go-to optics for these scenes. Pairing the lenses with Panavised Sony Venice large-format cameras, he leaned into the spherical primes’ individual and deliberately “imperfect” characteristics to express the strangeness of a being from another planet arriving in the American southwest. He found the 50mm prototype worked particularly well with close-ups. “Because of the large format, it’s like a 35 or a 38mm lens in the 6K space,” he notes. “And it was such a beautiful lens. It just starts to want to bend, and it rounds the faces so nicely.”

Maddox-Upshaw appreciated how the prototypes brought out the beauty of the actors’ skin tones and the desert’s hues. “Besides rounding out the image a little bit more in terms of the field of the lens itself, I also love that the color temperature of the lenses rolled a little bit warm,” he says. “They liked warm flares, they liked warm lighting. I prefer it that way. It helps me not to be as heavy-handed in the LUT and the lighting. I try not to have one aspect of my image-making do all the heavy lifting, because then I can manipulate it so different aspects are doing different things.”

When shooting establishing and wide shots, Maddox-Upshaw often relied on the 24mm prototype, which played up the curvatures in the space. For a memorable moment near the end of the first episode, as Faraday trudges through the desert alone, the cinematographer employed a custom 10mm H Series prime to render the character slightly warped and contorted. “Remember, this alien is learning to be human,” Maddox-Upshaw says. “He's on a mission because his world is possibly about to end, with his family there. So the context is his world is not straight, and he's not emotionally straight at that point versus when you first meet him.” 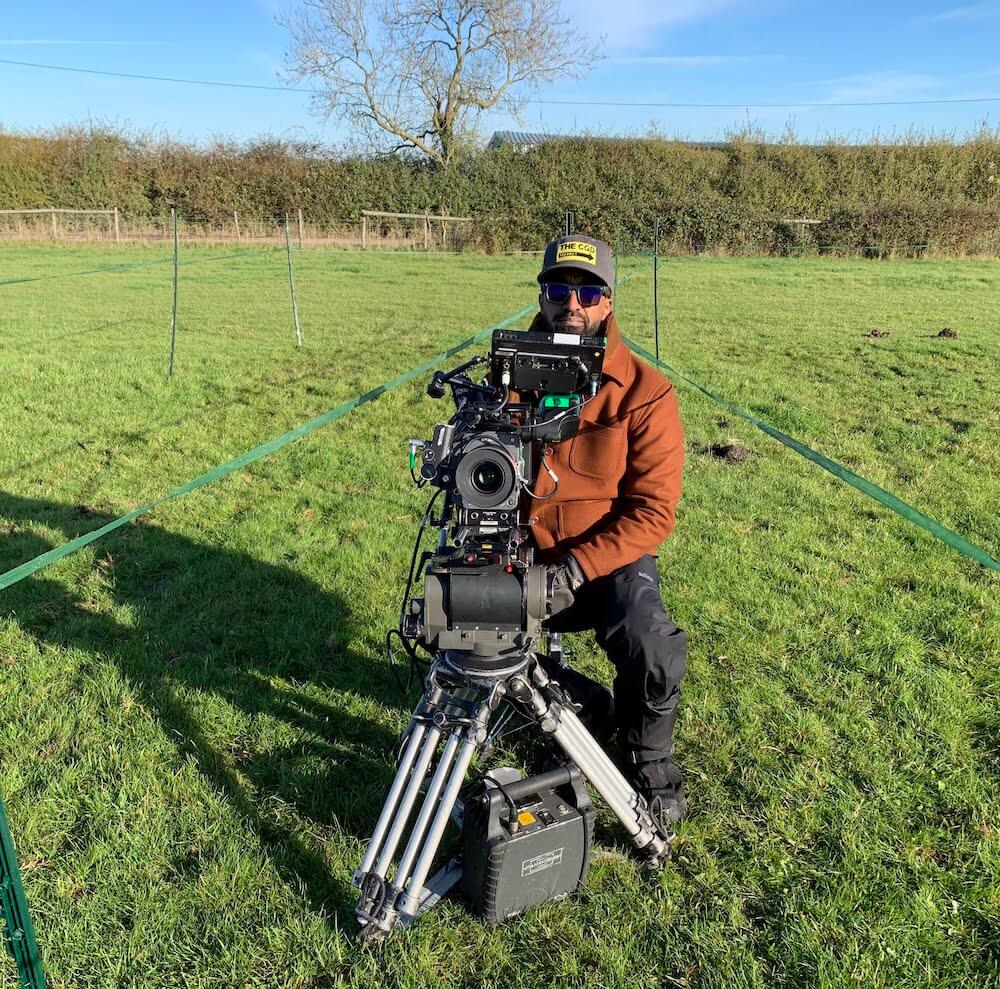 The opening teaser of the pilot offers the audience a peek at the polished tech mogul Faraday will become. Here, in contrast to the gritty realism of the New Mexico scenes, Maddox-Upshaw sought to craft a sharper, sleeker look, inspired by the glossiness Dariusz Wolski, ASC achieved in Prometheus and the corporate sterility Harris Savides, ASC captured for The Game. “What I wanted to do visually is show the arc of how we get to this more pristine Faraday,” Maddox-Upshaw explains. “When you first meet him, he’s on stage, and everything is quite pristine. We wanted him to be a clinical tycoon in a cold space. You could see his flesh tone is different than when he walks around New Mexico. He says to everyone, ‘How did I get here?’ and then we take you to the spherical space that’s a bit more round and bent when he first gets to Earth.”

To showcase these changes in character and story, Maddox-Upshaw chose to change lenses, and he found Panavision’s G Series anamorphics gave him the strongest counterpoint to distinguish the tech-heavy, future-modern scenes from those in the desert. While the spherical prototypes tend toward a softer focus and warmer color temperature, the G Series produce a tighter, higher-contrast, starker image with fewer aberrations.

“The G Series are a bit colder and really helped us lean into the sci-fi, clinical nature of the other storylines that come to evolve in episodes two and three with Hatch [Rob Delaney] and his family, the Floods,” Maddox-Upshaw says. “You definitely see a change and a different texture. We wanted that. We wanted it to be a striking difference when certain family members or whoever's controlling the scene came aboard. I wanted the audience to feel a bit of a jolt when they're going between the two, so they wouldn’t feel the same tone the whole time.

For episodes 5-9, cinematographers Adam Gillham and Balazs Bolygo BSC, HSC matched the look Maddox-Upshaw established in the first four episodes, and Maddox-Upshaw has nothing but praise for their achievements. He joined Gillham on the tenth and final episode, shooting half of it to bring the season home.

Looking back on the production, Maddox-Upshaw feels grateful for the opportunity Kurtzman gave him and is proud of what the crew captured and created. “It’s emotionally one of the most fulfilling shows I’ve done,” he shares. “The images we made, the story we told, and the performances we got are some of the best I've ever experienced in my career. And it was a dream come true because I really love sci-fi.

“There were some chances taken, and there’s some beautiful portraiture work, in terms seeing Black faces in the sci-fi space,” he adds. “I feel that honoring skin tones and diversity when I shoot opens more filmmakers’ eyes, and not only Black filmmakers, in that there doesn't have to be a monolithic palette in terms of who is involved in these great sci-fi stories. I hope we open the space up for other filmmakers to feel that they can explore putting people of color into the sci-fi realm.”